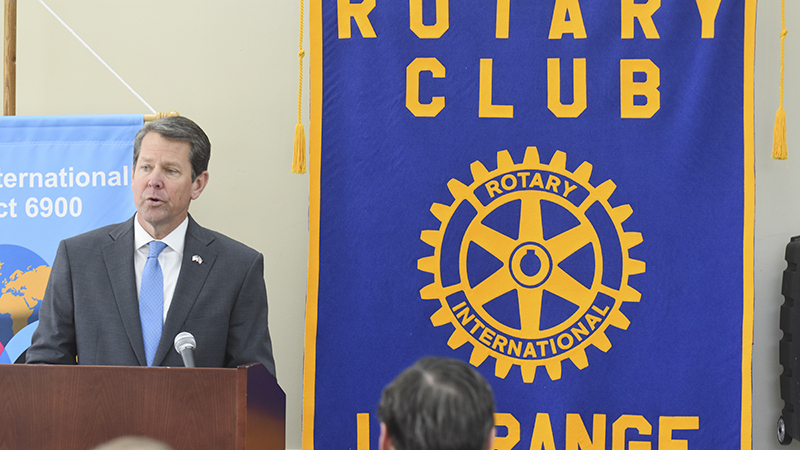 Current Georgia Secretary of State and gubernatorial candidate Brian Kemp spoke to the LaGrange Rotary Club on Wednesday. Kemp, who has served as the Secretary of State since 2010 spoke in regards to voter registration, the current legislative session, the annual registration period for for-profit and nonprofit corporations and much more.

What was noticeably absent from Kemp’s speech was any mention of the current race for the governor’s seat, although Kemp is one of several Republican candidates. Other Republican candidates include current Lt. Gov. Casey Cagle, State Sen. Hunter Hill, former Navy SEAL Clay Tippins, State Sen. Michael Williams, restaurant owner Eddie Hayes and former school teacher Marc Urbach. Stacey Abrams and Stacey Evans will square off on the Democratic side.

Kemp focused his time speaking on the efficiency of the business license registration process as well as the scrutiny that the voting processes in Georgia have received in recent years.

“As many of you will remember, four or five years ago it was very difficult to use the (business registration) system that Georgia had,” Kemp said. “It was just hard to use and not what we wanted. What I wanted was the best corporate system in the country, which I believe we now have.”

Since Jan. 1 of this year, 493,264 filings had been done as of March 21, of those 484,258 had been done online, making those filings much simpler for the government to process. Through the same day last year, approximately 413,000 filings had been completed. The increase in governmental efficiency has been a key platform of Kemp’s tenure as Secretary of State.

As it relates to voter fraud, security and undocumented voters, Kemp’s office has come under scrutiny in recent years. In 2015, a ‘clerical error’ led to the release of social security numbers and other private information of more than 6 million voters.

In 2017, a lawsuit was filed against Kemp on allegations that he and members of the Georgia State Elections Board allowed uncertified and compromised election systems to be used in the 2016 General Election and the June 20, 2017 Special Runoff.

Kemp, however, remains adamant that voting practices in Georgia remain among the best in the country.

“We’ve gotten a lot of scrutiny about some of our processes in Georgia that I personally believe help make our elections secure,” Kemp said. “Not only myself but some of our counties have gotten attacked by some of these groups that don’t live in Georgia. We really battled that, but at the end of the day when we got through the general election, we had one of the best statewide elections Georgia has ever had.”