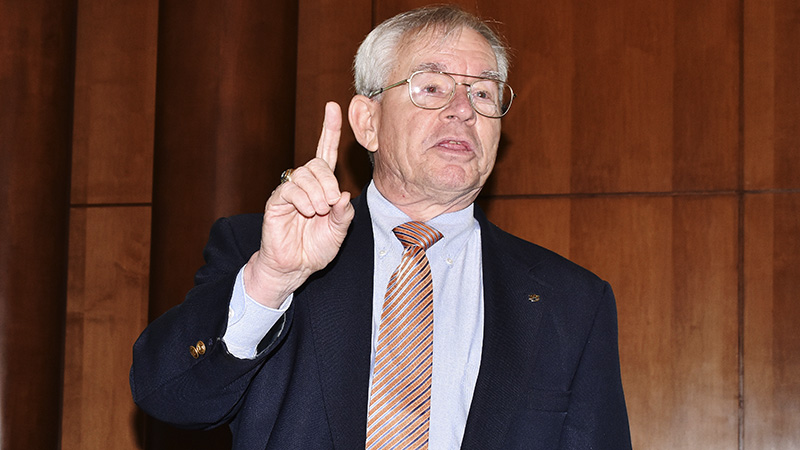 Retired U.S. Army Lt. Gen. Ronald Burgess spoke at LaGrange College on his career in military intelligence and security Tuesday morning. Burgess’ talk was part of the college’s cultural enrichment programs, and about 40 people from the campus and community attended.

Burgess served 38 years in the U.S. Army and worked in joint special operations command, as a deputy director of national intelligence and as a director of the Defense Intelligence Agency.

He retired from the DIA in 2012 and now works at Auburn University.

Burgess said he was responsible for the initial standup of the interrogation at Guantanamo Bay Naval Base, but not the detention center.

Burgess talked mainly about national intelligence such as understanding cyber security and nuclear threats. He said the downfall of Saddam Hussein was an example of an intelligence failure.

“The problem is Saddam Hussein was running what we in the military call the military strategic deception operation. The good news for him is his strategic deception operation worked. He was doing it against Iran. He was trying to make Iran think he had [weapons of mass destruction]. The downside for him is we also bought it hook, line and sinker, and he lost his life and his country,” Burgess said. “When we make a mistake on the intelligence side it stands out, and it should.”

Burgess said the U.S. national intelligence is strong on cyber security because they know their capabilities. He compared countries to Major League Baseball teams in terms of security.

“We are kind of like the Atlanta Braves, so we’re a professional ball team. But some other countries are pretty good,” Burgess said. “Russia would be the Chicago Cubs. They would be another major pro league team.”

Burgess said China is a team that finished last in the standings every year but has many players. He also compared Iran and North Korea to triple A minor league teams.

Burgess said the weakest link in any cyber system are humans.

Burgess was asked how often the U.S. engages in cyber warfare. He said the country does not attack often and that the national policy on cyberwarfare is still growing.

“Inside cyber you generally have three areas — offense, defense and exploit,” Burgess said.

“We do an awful, awful, awful lot on the defense. We do quite a bit on exploit because all exploit means is we understand the adversaries landscape and what is in the art of the possible.”

Burgess said China has built a DF-21D, an aircraft killer, which is one of their weapons that have one purpose.

Political science professor John Tures said he wanted to bring Burgess to the college since he wasn’t able to take his students to a distinguished lecture in Columbus a while back. Tures invited him to the college as a cultural enrichment event.

Burgess was given an honorary doctorate at LaGrange College in 2015.