Way of the future: Business park looks at solar energy 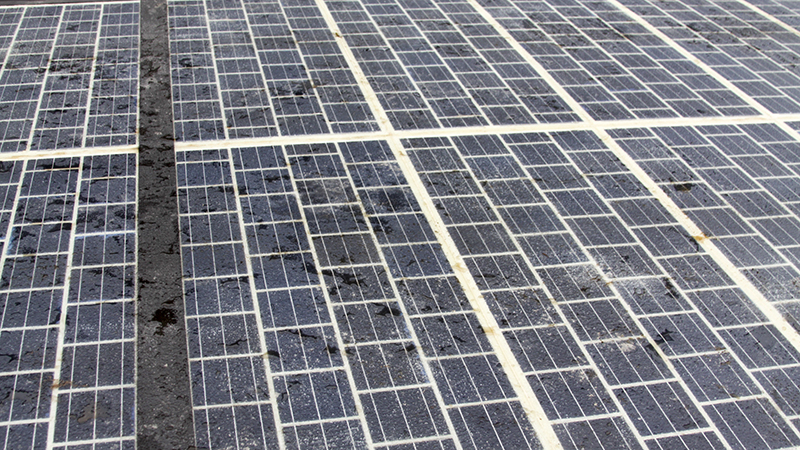 Local industries plan to look into solar power and other forms of clean energy as a way to cut costs and save the environment. The WattWay solar roadway shown here was installed at the Georgia Welcome Center in West Point as part of The Ray. The 50 square foot section generated 50 Megawatt hours of energy last year. (File photo | Daily News)

Clean energy will be one of the major components of the Georgia International Business Park, and local businesses are already looking for ways to use solar, wind and biofuel to grow.

During last month’s discussion on the GIBP, several businesses discussed plans to consider clean energy in the future. The GIBP will be the largest industrial park in the southeast in terms of size, employees and investment in the community. One of the stated focuses of members of the business park is increasing use of clean energy.

“To me, it is really about setting that vision,” said Thomas Hicks, the founding principal of The Mabus Group. “Partnerships are key. We have not been successful — whether it was the renewable energy or certainly the alternative fuels — without partnerships. … What we did together is work with industry, and so that was really [what made it possible] to get the results that we got with alternative fuels. It was really that partnership.”

Hicks performed duties under the Secretary of the Navy from 2014 to 2016 and again in 2017, and offered his expertise from the U.S. Navy’s transition to more clean energy sources. His expertise could prove critical to local industries who, like the navy, require a consistent energy source regardless of weather and other variables.

“From my point of view, we need 24/7 energy, and my dream to start with this project was that we would be able to build the first tire plant in the world that is based on fully renewable energy sources,” said Rami Helminen, Sentury Tire executive vice president and CEO for Sentury Tire North America.

“I’ve been trying to find different pieces to make it work.”

Hicks recommended a combination of several different energy sources to account for variables and emphasized the roles of energy efficiency and green energy in saving money and controlling costs.

“It is all of those things that you just laid out that you are going to have to look at,” Hicks said. “Certainly solar and wind aren’t going to be able to power your facilities 24/7, but it is going to be solar and wind and looking at biomass and energy storage and let’s not forget about efficiency itself as a way to reduce that overall footprint. That is always something that isn’t necessarily the most interesting thing to do. It is more fun to build the new, but that is another key area. We kind of did all of those [for the U.S. Navy].”

He also pointed out that the work that The Ray and The Ray C. Anderson foundation are doing to bring green energy solutions to the area will likely provide future opportunities for businesses near the 18-mile stretch of Interstate 85 that passes through Troup County.

The Ray is being used as a “living laboratory” for a variety of green technologies and is set to feature 3,000 solar panels in the near future.

“I talked to Georgia Power, and we are installing a Mega Watt solar farm on the highway shoulder,” said Harriet Anderson Langford, a trustee for The Ray C. Anderson Foundation and president of The Ray. “We’ll be the third state in the country to do that following Oregon and Massachusetts.”

“[This is] the first pollinator solar power that Georgia Power has ever done, the first right of way or highway pollinator friendly solar in the country,” Langford said.

“That is coming to exit 14. Georgia Power and The Ray will take it to the public service commission in April. … Expect that to be operational in October.”

Groundswell, a company that specializes in community solar projects and programs is also looking at LaGrange for an installation.

“We are working with Groundswell and with city officials to try to enable a community solar ray of some significant size for the City of LaGrange, and [we are] hoping we can build the kind of corporate and community support for what will be Georgia’s first city led community solar project, which will also directly benefit the community in that it will provide low income energy efficiency upgrades to the community,” Langford said. “I don’t want to steal any thunder, but we are really proud to be part of that.”

Those involved in these projects hope that the work being done will also draw more attention to LaGrange and the GIBP.

“It will be a continual opportunity for LaGrange to lead and attract more positive attention,” said Michelle Moore, the CEO of Groundswell.