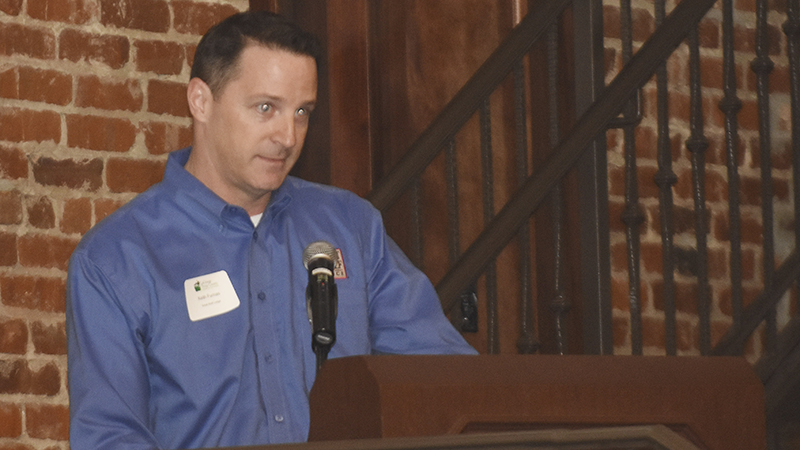 The lodge will hold a soft opening starting May 7, according to general manager Keith Furnas. Furnas was the guest speaker at the breakfast, which is hosted monthly at Del’avant by the LaGrange-Troup County Chamber of Commerce.

The soft opening will be by invite only, but it will give the lodge a chance to make sure everything is operating smoothly before the grand opening on May 24. The lodge is currently taking reservations for May 18 and beyond, Furnas said.

“We will be inviting a lot of folks from the community, as well as the folks who helped us build Great Wolf Lodge Georgia, out during that period to put us through the stress test, to let us know what we are doing well and what we can improve on,” Furnas said of the soft opening.

Furnas talked about Great Wolf Georgia being the “flagship” property for the company, since it’ll have all new designs and attractions. The park includes a nearly 100,000 square foot water park, conference center and 457 guest rooms. There are many features that make LaGrange’s Great Wolf different than the other 15 locations, but Furnas specifically discussed the Triple Thunder and Rapid Racer slides. Both are new to Great Wolf and figure to be a big hit.

Of course, Great Wolf also needs hundreds of employees — or “pack members” — to greet the half a million guests expected to visit the lodge each year. Furnas said Great Wolf is currently hiring close to 700 people.

“We started that process on a slow scale a few weeks ago, and we actually got ourselves up to about 80 folks,” Furnas said. “But yesterday we started our hiring event and that’s going on from 11 a.m. to 7 p.m. every day this week, and yesterday was crazy. I think we ran out of parking. Out of the 650 we’re hiring, we’re up to about 200 pack members.”

Furnas also said they want to be a part of the community, including selling local products out of the lodge. There’s also a plan to work with local farmers for the lodge’s Barnwood restaurant, for a farm to fork setup.

“We are a good partner to the community, and we don’t want to be the big place out on exit 13 that just stands out there alone,” Furnas said. “I’ve already talked to some folks about fundraising, and we want to be a part of community events where we can be of assistance there. We’re looking forward to getting started. We’ll be bringing over 500,000 people on an annual basis, so I hope you guys are ready.”

City shutting down non-essential offices to pick up litter