Wreck turns vehicle on its side 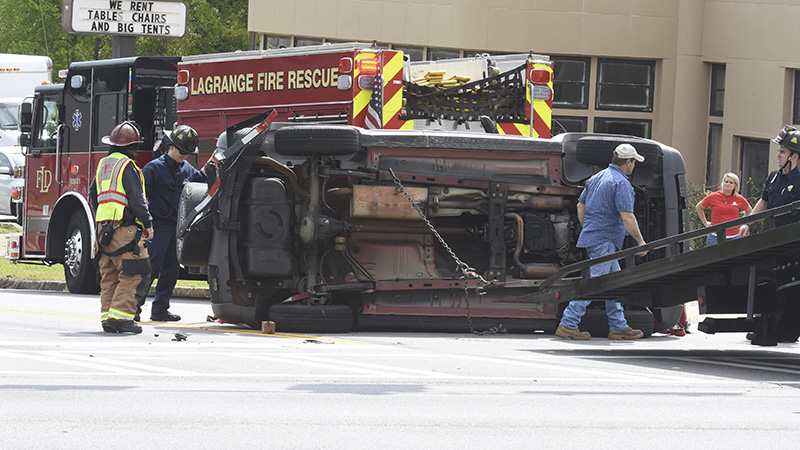 An accident at the intersection of Greenville Street and Morgan Street left one vehicle turned on its Tuesday morning. --Daniel Evans

A two-vehicle wreck in downtown LaGrange briefly delayed traffic Tuesday morning. The wreck occurred before noon at the intersection of Greenville Street and Morgan Street.

A Jeep flipped on its side from the contact, but nobody was hurt in the accident, according to LaGrange Police Officer Brandon Sparks. A second vehicle received front end damage, Sparks said.

With assistance from the LaGrange Fire Department, the LPD towed the Jeep and the roadway was cleared by noon.

“These are main roads, and if we have them backed up, they can get backed up for miles if we don’t work them efficiently,” Sparks said.

Cody White, 26, was arrested for allegedly using another person’s credit card without their permission and signing their name Tuesday. According to TCSO Sgt. Stewart Smith, White, from Roanoke, Alabama, started using the credit card in late January.

White knew the victim, according to Smith.

A pressure washer and more than $500 cash were allegedly taken from an apartment at the 100 block of Wynnwood Drive between Saturday at noon and Monday at 9:30 a.m. A resident told police a box of coins was also taken.

The pressure washer was valued at $179, according to the police report.

Police noticed two pry marks on the frame of the back door of the apartment.

A BB gun was allegedly taken from a locked vehicle at the 200 block of Thomas Street between Monday at 2 a.m. and 10:45 a.m. The vehicle owner said $5 in coins and a pack of cigarettes valued at $5 were also taken.

The vehicle owner valued the gun at $40.

A rental truck’s tires were allegedly slashed at the 900 block of Mason Street between Thursday at 7 p.m. and Friday at 11:42 a.m. The vehicle’s renter estimated the damage at around $450.

A vehicle was scratched and had inappropriate words written on it at the 300 block of Harwell Avenue between Sunday at 9 p.m. and Monday 10:23 a.m. According to the police report, the vehicle had scratches on all sides and an inappropriate word on the hood.

The damage was estimated to be more than $500.

A rock was thrown into a window at the Law Office of Kimberly C. Harris on Broome Street between Friday at noon and Monday at 8:30 a.m. According to the police report, there were several rocks outside the property.

The rock found inside the building not only broke a window pane, but also punched a hole through the screen and broke the blinds in the window. The hole in the window was baseball sized, according to the police report.

All information in this report is gathered from official law enforcement and public safety reports and releases.