Massie has spent 25 years as dispatcher for Troup County E911 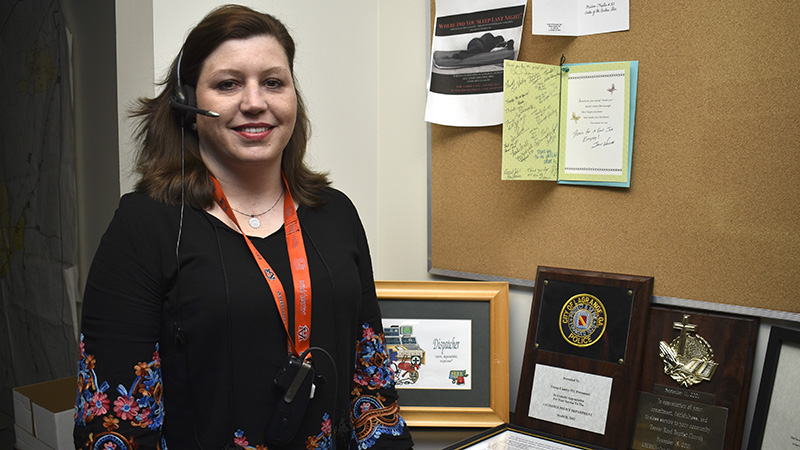 Most people just like their jobs. However, Tonya Massie, a Troup County E911 dispatcher supervisor, said even on her worst day she loves her career.

“I started when I was 18, and, honestly, I love what I do,” Massie said. “I would not want to do anything different.”

Massie has worked with the Troup County E911 for 25 years. Massie took the job because she needed one, and her father was the warden of Troup County Jail at the time.

“She gave me a chance, and I’ve been here ever since.”

As a dispatcher, Massie said she takes calls and dispatches the Troup County Fire Department. Dispatchers have about six computer screens and five keyboards at their desks.

Massie said when she first started the job, the center was not as busy. They had four radios and one of them was for both EMS and Troup County Fire.

“But now you can see we have five people working at one time,” Massie said. “When I first started, we had one computer in the room and it was the Georgia Crime Information Center computer, so it has changed a lot.”

Massie said that she likes that her job is something different every day.

“Even after 25 years, I could come in here and I could take a call that I have never taken before,” she said. “It’s just something different every day.”

Massie met her husband, Rick, while he was working at the Troup County Sheriff’s Office and she has worked with him on the job. The two will have been married for 23 years in May, she said.

“We did not like each other to begin with. We argued a lot on the radio, but then we met in person, and, honestly, we’ve been together ever since,” Massie said.

Massie said that she likes feeling that she has helped people in need.

“A lot of times we don’t know what the outcome is going to be, but I still feel like we have a part in all of that, good or bad,” Massie said.

“Whether it’s we’re dispatching them, whether we’re giving them CPR instructions, whether we’re just keeping them calm until somebody can get there, whatever the case may be.”

Outside of work, Massie said she likes spending time with Rick and her two children, Chuck, 20, and Tara Lynn, 15.  National Public Safety Telecommunicators Week is from Sunday to Saturday.