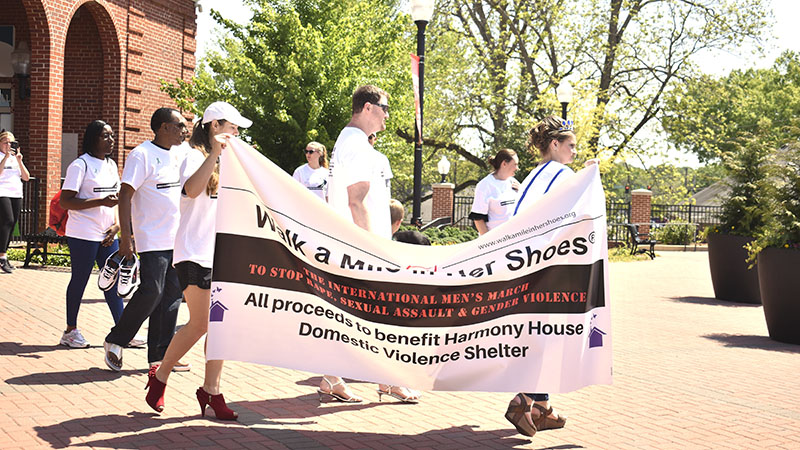 The walk was supposed to be a fun way to bring up a serious topic.

On Saturday, men strapped on high heels and walked the streets of downtown LaGrange for Harmony House. The Walk a Mile in Her Shoes event raised money for Harmony House’s sexual assault awareness program.

About 20 people attended the inaugural event. The walk was a part of the International Men’s March to Stop Rape, Sexual Assault and Gender Violence.

“April is Sexual Assault Awareness Month, and now is a perfect time to step up and speak out,” said LeKae Ford, Harmony House community educator. “I encourage you today to think about what you can say to defend the voiceless, what you can do to protect those who have been wronged and how you can start the discussion on the topic that has thrived from silence for so long.”

“This is the first time ever doing an event like this, so I think that we’re excited, and, hopefully, it will be something they plan to do every year,” said LaGrange College Student Kaylee Bebee. “I know there’s a lot going on in town today, so we’re just for whoever is here.”

John Scattergood said he thought he could only last walking a block in high heels.

“This is what I said to all the women here, ‘I question y’alls sanity for wearing these things,’” Scattergood said. “They’re really foolish.”

Bebee said the event was a fun way to talk about these kinds of hard topics.

LaGrange College student Caroline Stinson gave the men who attended instructions on how to walk in heels.

“Over 19 years ago, an18-year-old in Italy was raped, and she had on jeans,” said Renonda Forney, sexual assault advocate, in a previous interview. “And [the court] found him guilty, and he went to the supreme court to appeal it. The appeal she lost, and [the justices] let him go free because they said it must have been consensual with her having on such tight jeans, and he managed to get one leg out.”

The day after the verdict, women in the Italian Parliament went to work wearing jeans to show solidarity with the victim. To participate in the day, people just need to wear denim, Forney said.