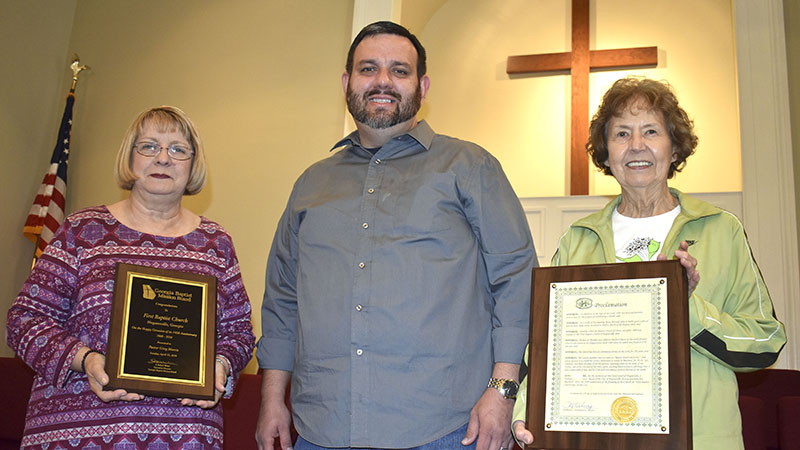 First Baptist Church of Hogansville secretary and music director Lynn Campbell, pastor Greg Morris and clerk Ellen Davis pose for a photo with their plaques from the city and Georgia Baptist Convention.--Gabrielle Jansen

“I grew up in this church, and then I moved away in my adult life, and then after I retired, I came back. So, I’ve been back in the church here since 1996,” said First Baptist Church clerk Ellen Davis. “And it was just very special to see people coming back.”

The church was founded by 24 people on March 6, 1868. First Baptist moved to another building and held its first service in its  current location on Main Street in December 1956. Davis said John Carpenter, who was the pastor when the church moved, attended the anniversary Sunday. A lot of former members attended the service, Davis said.

“Out in the country, homecoming at church is called Decoration Sunday. They decorated cemeteries, but now we’re a bit more modern, we do homecomings,” said pastor Greg Morris. “It’s a big deal in Baptist churches in the south. It’s just a time of fellowship and reliving, reminiscing what God’s done for us.”

Davis said she likes to think the church has made a difference with mission work in the community.

“We thought we must have a lot of good leadership, good pastors, good men and women working throughout all of that time for our church to really last that long because that’s a long time of the life of one church,” Davis said.

The church was also given a plaque by the Georgia Baptist Convention.

The church held a luncheon for 180 people in addition to the special service.