Helping kids succeed: Peterson has served as LEAD instructor since 2013 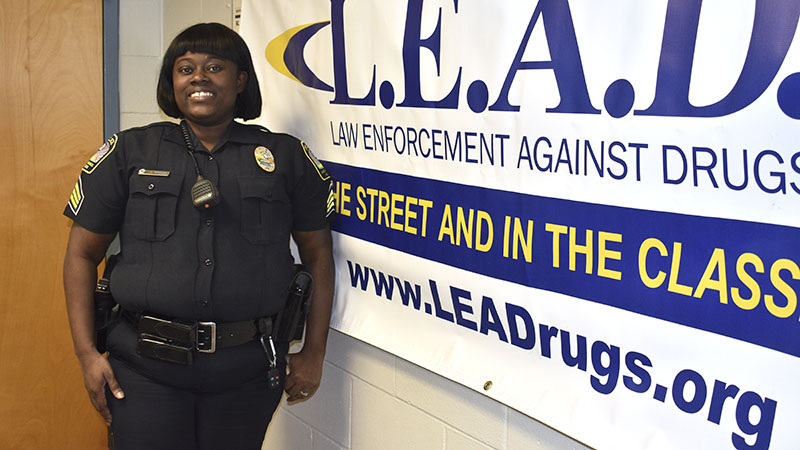 Recently promoted LaGrange Police Sgt. Monica Peterson will leave her position as the Law Enforcement Against Drugs instructor in May, but her passion for helping children remains strong. Peterson has served as the drug abuse resistance educator, but has been promoted to Sgt. and will serve as the leader of a patrol shift.

Peterson said she will still stop at the schools as often as possible to eat lunch with the elementary students.

Peterson has worked with the LPD for 12 years and stepped up as the Drug Abuse Resistance Education instructor when the position became available in 2013. She said she really enjoys working with kids and teaches LEAD to fifth grade classes.

LEAD also teaches students how to handle themselves and walk away from situations where they can get help.

“And we also tell them there’s safety in numbers,” Peterson said. “You find some people who have the same mindset as you do and things kind of work out better if you’re all on that same level.”

A LaGrange native, Peterson grew up in the Lucy Morgan Homes. She said she was raised by her mother who did the best she could and supported her.

“If I told her that I wanted to be an astronaut, she would be ‘OK, you can do it,’” Peterson said. “It didn’t matter what I said I wanted to do, she never told me I couldn’t. She always encouraged me to do anything that would make me happy. It was good.”

Peterson said she lost a lot of friends she made growing up after joining the police department.

“But my mom always said ‘if they were your true friends, then it wouldn’t matter what uniform you put on. You still have the same values, so it always works out,’” Peterson said.

Peterson graduated from Callaway High School in 2000 and joined the U.S. Marine Corps when she was 18. After being honorably discharged as a lance corporal five years later, she was looking for a good place to work. Peterson said she became interested in joining law enforcement after meeting Senior Officer Natalie Belcher at the city’s utility office.

Belcher said she doesn’t remember that first meeting, but Peterson is one of the hardest working officers at the department.

“I remember back when I was in patrol at the housing authority,” Belcher said. “I would stop out with kids all the time, and I don’t remember talking to her, and I’m just glad I made some sense so she actually came to join us. She’s been an awesome officer, and she’s worked extremely hard to get where she’s at.”

Peterson applied to the LPD twice. She said she tells her children and her students to never give up even if they fail at first.

“I honestly believe in dedication and perseverance because I do try hard, and I don’t always make my goal — like when I went to be an officer the first time, I actually failed. And I waited 13 months, tried again, finally passed,” Peterson said. “I can’t think of anything I’ve ever done that I successfully got through with the first time.”

Peterson said her favorite thing to do with the students is have lunch with them. Her favorite part of teaching is changing students’ perspectives on police and that she’s not there because some students are in trouble.

“Kids are awesome,” Peterson said. “It feels good to have that conversation with them because when you open the door with kids, parents follow.”

One of her favorite stories is when she would check in on a student who often got in trouble. If he behaved himself for the week, she would bring him lunch, Peterson said.

“One day, me and him are walking down the hall together. And another kid walks up to him and says ‘Is that your mom?’ And he looks at me and he looks at the kid and says ‘no, but she’s like my mom,’” Peterson said.

In addition to taking a new shift next month, Peterson will graduate with a bachelor’s degree in human development and family studies from LaGrange College. Peterson is a mother of three — twins Jayvon and Jakwon Nunley, who attend CHS, and Desmon Nunley, who attends Callaway Middle School.

“This is my community, born and raised. I am a Georgia girl. I’ve gotten to go to other places, but I prefer to be here,” Peterson said. “It never ceases to amaze me. People will go into the military and be willing to give their lives for the military, but if I’m willing to do that, then I’m going to do it here right in my community.”