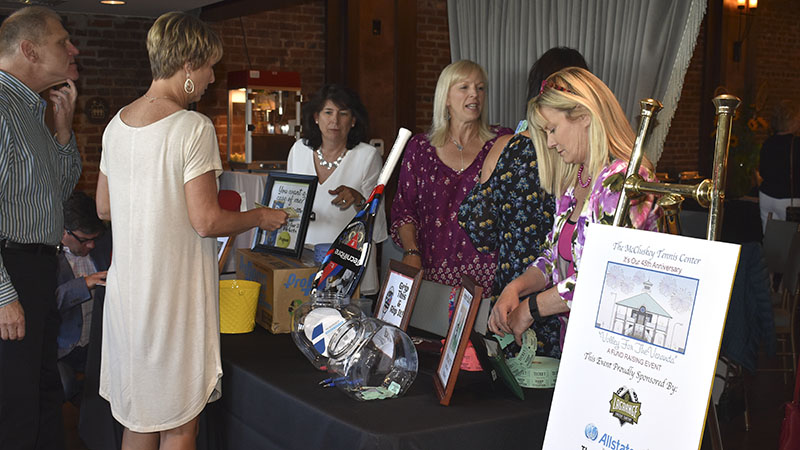 Tennis fanatics were served up a good time at the Volley for the Verandah fundraiser event Friday night. The dinner, dance and silent auction was held at Del’avant to raise money for the McCluskey Tennis Center renovations, which includes resurfacing six courts, upgrading court lighting and building a verandah.

Allstate Insurance sponsor Michelle Cornett said their goal for the evening was to raise $20,000.

“We’re a growing facility,” Cornett said. “We’re in our 45th year and tennis is a huge part of this community, and we were given a grant. We’re really stretched for space, so we’re given the opportunity to renovate the entire building, so that’s what we’re doing.”

The Callaway Foundation is giving the Troup County Parks and Recreation center a $575,000 grant for the renovations. The tennis center will also receive $150,000 from SPLOST V.

“We play over there for a little bit as well,” said LaGrange College Head Tennis Coach Matt Donnett. “We actually had our conference tournament over there this year, so it’s a good thing.”

Jennifer Bogle said the renovations are very important because of the annual tennis tournament held at McCluskey, and that the new verandah will be more accommodating.

“As soon as I moved here, seven years ago, the first thing I did was go to McCluskey and signed up because I played in North Carolina, where I was from,” Bogle said.

“And then as soon as I signed up, I’ve been playing ever since.”

Cornett said they expect to break ground in August and have the renovations completed by spring 2019.

“We hope that brings some new tennis people,” Bogle said.