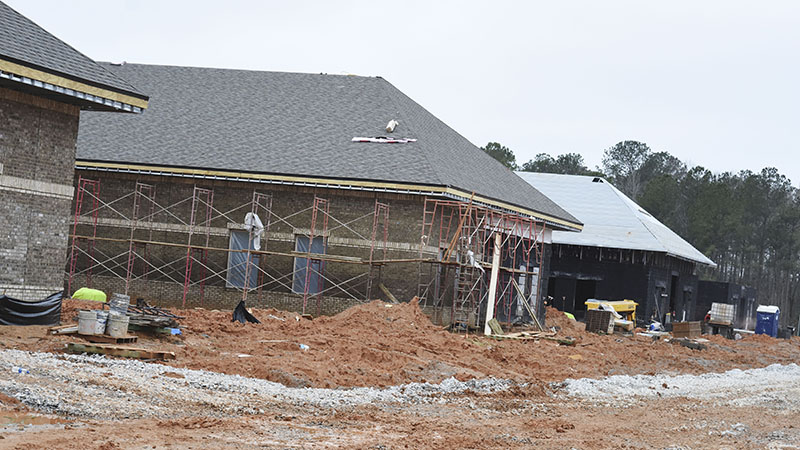 Shown are photos from the construction work at the new Clearview Elementary School. --File Photo

Between two new high school gyms, a new elementary school and campus security, everything is progressing quickly for the Troup County School System. The Troup High School gymnasium is further along in construction than LaGrange High School’s, and Clearview Elementary School is set to open in August, according to Assistant Superintendent John Radcliffe.

A segmented wall is nearly in place and the under slab is about to be lined with plumbing and electrical for THS, he said in mid-April.

“Over at LaGrange, we’ve completed the purchase of the property we needed for the school,” Radcliffe said. “The surveys are done. The architects now are using the data that they received from our engineers here in town.”

Radcliffe said the system needed to buy the property for LHS, whereas they already owned the land for the gymnasium at THS. The LHS gym is set to be at the corner of Greenwood Street and Highland Avenue.

The LHS gym now needs the preliminary drawings to be presented to the school, alumni boosters and school board for additional input, according to Radcliffe.

“They’re both moving along. We are looking at July 2019 for Troup. We have not set a date for LaGrange,” Radcliffe said. “We think it will probably be somewhere between a 14-month buildout once we get started on LaGrange.”

Clearview Elementary School is currently under construction. Radcliffe said the “A” wing of the building has ceiling tiles and painted walls and is in the process of drying out the slab. Floor tile was set to be laid this week.

Radcliffe said everything is coming along.

“Even though we’ve lost 30-plus days to rain to the construction, Carroll Daniels (Construction Company) has done a fantastic job in getting that school up and out of the ground,” Radcliffe said. “And we still expect to take possession of the school sometime in early July.”

Clearview will also have a security system put in where the school’s receptionist at the school can press a button that will lead to a shut down in case of emergencies, according to Radcliffe. He said it is similar to what Ethel Kight Elementary School has for security.

The school will have high tech security cameras and the school system will be installing cameras in the other schools during the summer as well, according to Radcliffe.

“It’s not really different, but these are getting the special treatment, if you will, over there,” Radcliffe said.

Whitesville Road Elementary School, which is closing at the end of the school year, may hold summer camps this year, according to Radcliffe.

“We are looking at various options on the property now,” Radcliffe said. “One is to sell it. One is to work collaboratively with the county on some programs, but I think the preference would be to sell the property.”

Because of the new school, the elementary schools have been rezoned.

“Anytime you have growth in the community, schools are built for a number of students. You have to look at your boundary lines, and you adjust those lines according to population shifts and moves,” Radcliffe said.

The school system is also asking for a stoplight at Lukken Industrial Drive and South Davis Road, according to Radcliffe.

Radcliffe said he started working with the school system eight years ago, and that the facilities have improved in that time.

“I think these athletic facilities will go a long way in increasing the relationships and the relevance a part of it for the school,” Radcliffe said. “Moving forward, I see nothing but continued growth for the community.”

“And for the school system as we continue to improve, our superintendent is all about improvement,” Radcliffe said. “(When) we have meetings with him, he wants to know how what we’re doing will improve the environment and the educational opportunity for kids.”