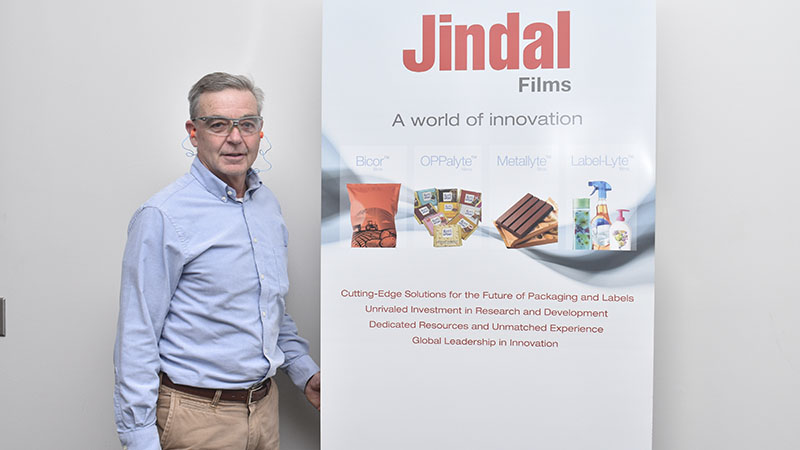 Kevin Donovan, production manager at Jindal Films, poses for a photo with one of the company’s banners. --Gabrielle Jansen

Some types of industries are made to weather any type of economy. Jindal Films, which makes labels and packaging for food products, is one of them, according to production manager Kevin Donovan.

“We’re kind of recession-proof because you’ll eat these things whether we have a recession or not. People will eat and people will drink water,” Donovan said. “People do all of that stuff even when the economy is bad, so we’re not one of those industries that [suffers], and that’s what’s good for LaGrange.”

Donovan said the company’s location in LaGrange has never had a layoff in 27 years.

The company also makes pouches and is currently expanding another line for packaging, which is expected to be ready by Aug. 1, 2018, according to Hogg.

“We have a metalizer for metalized film, and then we have two additional lines that are produced in product. It’s supposed to be a much faster line, and it’s going to have all of the modern technology,” Hogg said.

The company broke ground for the expansion site in the fall of 2016.

“First, we did the clearing of the land and getting our general contractors in place,” Hogg said. “From that point, we’re at the point where we’ve started to install equipment into the new facility.”

Hogg said the expansion used local contractors and local suppliers for the job.

Donovan said the metalizer was added to the plant a year ago, which has expanded the product line. Donovan said the LaGrange location has robots and is in the process control industry.

“We’ve also opened up [a research and development/ innovation] center. We have customer service here, accounting, finance and human resources have all moved here in the last two to three years as well,” Donovan said. “We’ve added over 100 jobs in the last three years.”

Donovan said the company has more than 200 employees. About 60 million pounds of packaging is produced from Jindal Films annually, according to Donovan.

Progress means continuing to dominate the film and packaging industry, according to Hogg.

“We continue to dominate the market, so we hope to add another line in the next ten years to become even more dominant within the market,” Hogg said.

According to Hogg, the expansion will create more than 100 new jobs in LaGrange.

“Even during the acquisition of ExxonMobil by Jindal, we have not laid off employees,” Hogg said. “We’ve been able to keep production going to provide our employees with a secure job.”

The film production plant, originally owned by ExxonMobil, was bought by Jindal in 2013.

The facility has to be certified for it to pass packaging standards, according to Hogg.

“Because we’re packaging food, we have to be clean food certified,” Donovan said. “So we have to pass inspections.”

Donovan said Pegasus Parkway in LaGrange got its name from Exxon Mobil’s mascot.

“When Mobil came in 1990, because Pegasus was a part of their logo, that’s how we got Pegasus Parkway,” Hogg said.

“This was a dead-end street right down from us. Then they extended Pegasus Parkway, so we are tied to the industrial park, but we are not part of the original industrial park.”

They also are an environmentally friendly site, Donovan said.

“We also partner with some of the educational (systems), like LaGrange College, West Georgia Technical College, THINC Academy and the school board to interact with them and be a part of their career focus so that it gives the students the opportunity to know what’s available as far as jobs when they complete their education,” Hogg said.

The future is wide for recruiting students and seeing how the economy will impact the city and Jindal. If anything, Jindal is looking more at expansion instead of about slowing down.

“Five years (from now), future expansions are dependent on market conditions that will determine whether we expand,” Donovan said.

Coming into clear view: Construction work coming along on…