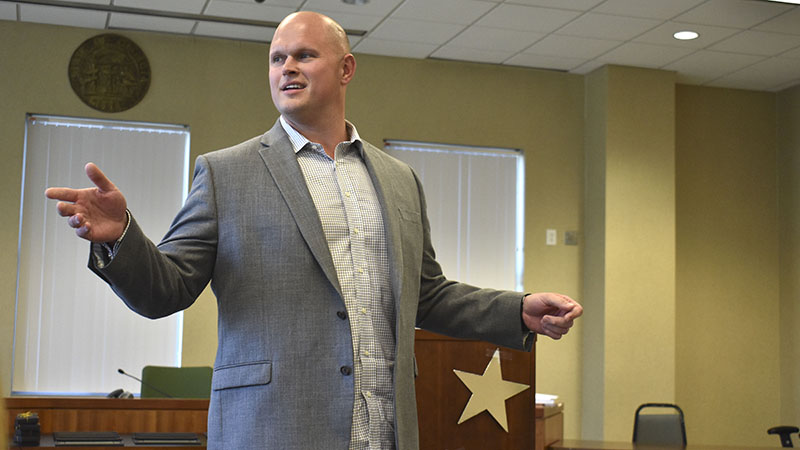 Fifteen people graduated from the Troup County DUI/Drug Court Thursday at the government center. The 12-month minimum program is an alternative for those facing jailtime for DUI, according to coordinator Denise Smith.

Participants attend group and individual treatment sessions, participate in self-help groups, go to court every other week and do drug screenings twice a week, according to Smith. To graduate, participants need to meet all of the treatment goals.

“You’re coming in and meeting with a case manager,” Smith said. “And you have to do everything that the program requires of you.”

Participants also have to pay fines and stay sober, according to Smith.

“Graduation day is the most hopeful of all days,” Smith said.

“It’s good to see people really changing their lives, and people can change, given enough support and so forth, and some of the tools that we give them,” Little said. “People can turn things around. Sometimes they’re so caught up in their addiction, it takes a little while, but when they really dig in and want a different life, it works.”

Graduate Amber Costley said the program opened opportunities for her career, and she made friends through it.

“It can be overwhelming, but you just got to take it a day at a time,” Costley said. “Don’t let it stress you out. Like I’ve always said, this was a choice. You were given a choice to do jail or do the program, so you have to be positive about it and do your best at it.”

Troup County resident and former NFL player Steve Herndon spoke at the graduation. He said he will be sober for 12 years in October.

Herndon said those with alcohol or drug addictions are not bad people.

“The reality is for those of us who are blessed enough to find a program of recovery, we have a design for living,” Herndon said. “We have a tool kit that other people don’t have, and so I like getting out and talking about recovery and what it can do for us. And we really do have an advantage on the rest of society.”