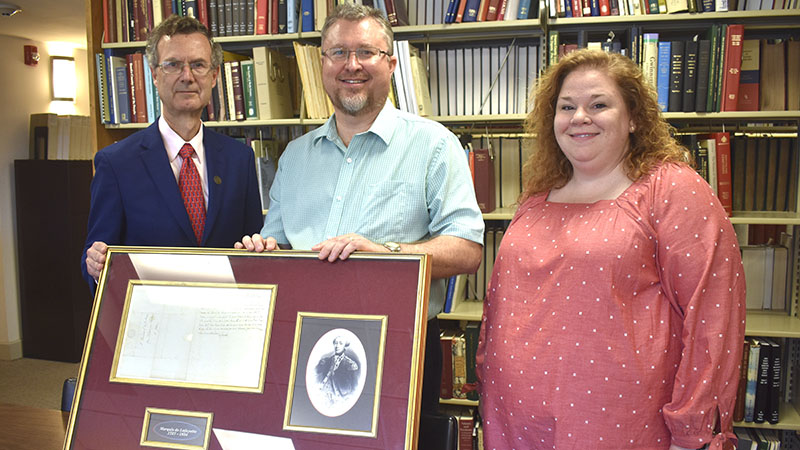 The Troup County Archives was given a letter written by Marquis de Lafayette before Thursday night’s Lafayette Alliance meeting.

The Lafayette Alliance is an organization that is working on educating all residents of Troup County on the historical figure’s life and impact on the United States.

Lafayette Alliance member Brian Germano said his father bought the letter at an auction in 1979 for about $200 or $300. Germano decided to donate the letter to the archives since his family is moving to Lawrenceville.

“It’s hung on [my parents’] wall until about four years ago, five years ago, and they were moving to the mountains and donated it to us,” Germano said. “And we had it on our wall here, and our family’s been enjoying it. But now that the Lafayette Alliance has been formed, and to raise awareness of the importance and the contribution of Marquis de Lafayette in the community and to LaGrange, we thought it’d be appropriate to donate it as an actual piece of the person we have been talking about whose statue is on the square.”

“So even a person who speaks French today, unless they’re fluent in French and are from there, they may not be able to read it,” Germano said. “An American who just learned French last year probably couldn’t necessarily read it because it’s written in a dialect that is old French. It’s not a letter talking about Yorktown or George Washington or anything like that. It is more of a standard letter.”

The letter was addressed to a Mr. Chumms and was sent to Paris, France. Germano said it was appraised to be about $1,000.

Commissioners approve agreement for county to earn interest from…