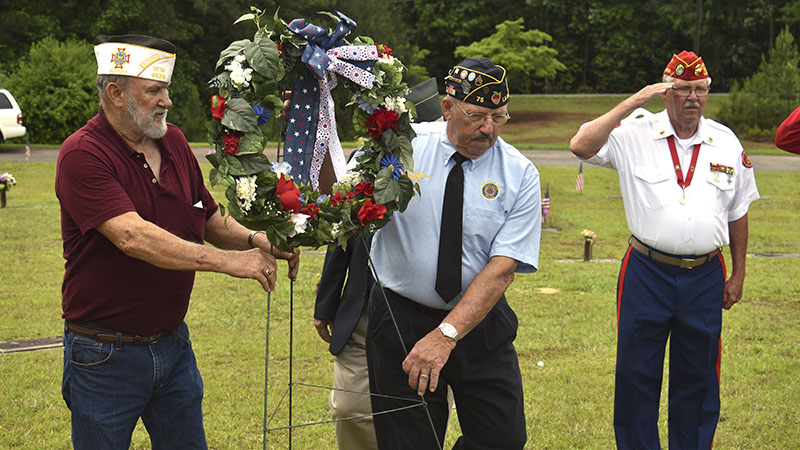 The service was held at Roger A. Smith’s grave, where a wreath was first laid. Smith served in the U.S. Navy.

The wreath was later moved to Medal of Honor recipient Staff Sgt. Hammett Lee Bowen Jr.’s grave. Bowen served in the U.S. Army in Vietnam, and jumped on a grenade to save three others in 1969, according to the Congressional Medal of Honor Society.

Retired U.S. Air Force Major David Frick spoke at the service about his deployment to Iraq in 2008.

“I served for one deployment lasting one year … Basically, I bought things for the Air Force. Planes, bullets, parts, repair, so forth,” Frick said. “Before I left for the deployment, I asked my family not to watch the news. I did not want them getting worried seeing a story about ‘oh no was he part of that?’”

Frick said none of his stories made national news, but he wanted to share some of them.

He said one day he was talking with fellow service members when a rocket struck a gym.

Frick also told the story about when he was coming home, and the plane stopped midway through the journey. He was getting impatient and frustrated when he realized they were loading four coffins on the flight.

“We had the honor of escorting soldiers home,” Frick said.

“Today, we remember those who have given their lives to ensure our freedom. Let us also remember, the families that they left behind and the families of those who are currently serving in our armed forces.”

Frick is currently the JROTC instructor at Troup High School.

“May the generations yet to march down the corridors of the centuries to take our places preserve the ideals and revere the memories of these who are dead,” Hammock said.

Mandy Brown led the singing of the National Anthem and God Bless America.