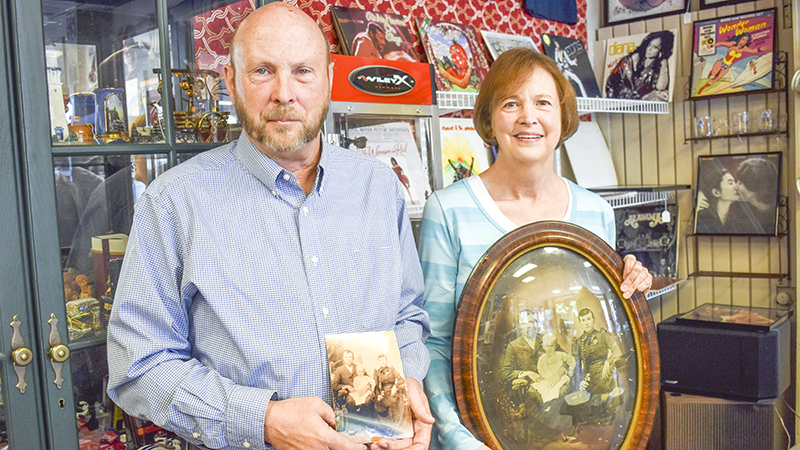 Siblings Russell Cook and Diane Bradshaw hold a photo and the portrait of their grandfather William Cook and his parents Thomas and Emla at R&B Consignment. --Gabrielle Jansen

Some people go to consignment shops for hats, TVs or records, but when LaGrange resident Russell Cook went, he found a piece of family history.

In 1890 or 1891, late LaGrange resident William Hamilton Cook was photographed as an infant with his parents, Thomas Franklin and Emla Wingo. In April 2018, the same photo portrait was found by Cook, his grandson, at R&B Consignment’s Facebook page.

Cook said he knew it was his family since his grandfather had the same picture in his house growing up.

“I was familiar with the picture because we had cleaned it up, and we had given everybody in the family a copy of it,” Cook said. “That’s why it was kind of not necessarily fresh on my mind, but why I recognized it when I was thumbing through Facebook Marketplace one night, and I saw this portrait from the consignment shop, and I went and got the picture and I thought ‘this has got to be.’”

Cook compared his picture to the one he saw on his phone before messaging consignment store owner Ron Willis.

Willis said he got the photo through one of his vendors and had it in the store for eight months before posting it on Facebook.

“[My vendor] had some stuff for me to do consignment, and she said she had it,” Willis said.

“She said ‘well I don’t know who this family is, but a lot of people like old pictures just to hang up.’ And I said ‘ok well let’s see what it does. Let’s put it in store.’”

Willis said the vendor picked it up at a yard sale, and he was trying to sell it for $50.

“I’m glad that it hooked up with the original family,” Willis said.

Cook said his grandfather was born in 1889 and that they think the picture was taken when he was 2 or 3-years-old.

The photo would have been taken in Roanoke or Randolph County because William didn’t move to LaGrange until 1920, Cook said. Cook said Emla had a child in 1901 who died a month later. Emla died a year later.

“Dad always said that she grieved herself to death,” Cook said.

Thomas remarried and had three daughters with his second wife. Cook said Thomas died in 1907.

Cook said the family were farmers and William moved his family to LaGrange where he worked in the plants.

“He was a jack of all trades,” Cook said. “He was very mechanical, he learned quickly how to fix those looms and mills and at that time that was the best job in the loom.”

“He used to love wrestling and try to do the wrestling moves,” Webb said.

“I would ride my bike and fall, and he would say ‘come on over here, and I’ll pick you up.’”

Cook said he has no plans of what to do with the portrait yet.

“I go to Cracker Barrell, and I’m sitting there and I’m looking at those old pictures on the wall and I think ‘that’s somebody’s grandfather or something, and it’s been lost,’” Cook said.