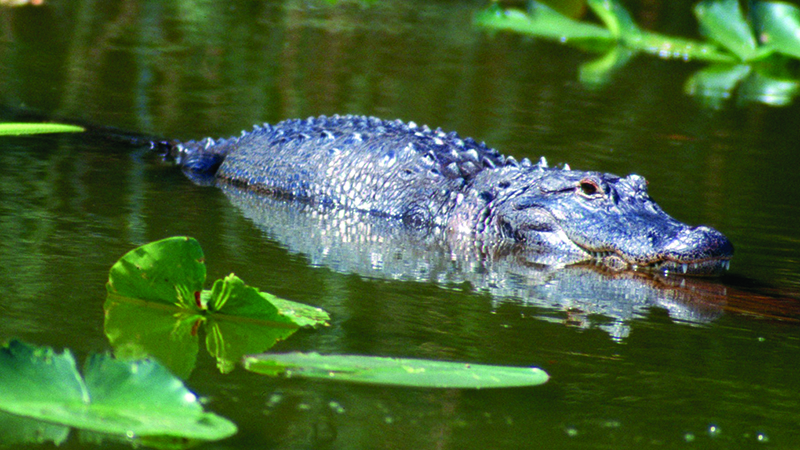 Despite a video from 2016 making the rounds on social media, the U.S. Corps of Engineers said there have been no recent alligator sightings at West Point Lake. -- Stock Image

Despite a popular video of an alligator at West Point Lake from 2016, the U.S. Army Corps of Engineers said that is the only one confirmed report of the reptile species in the area in recent years.

“This is not a common occurrence here at West Point,” said David Barr, supervisory park ranger of the West Point Lake U.S. Army Corps of Engineers. “We believe that someone may have had this as a pet and just released it.”

Barr said the one alligator confirmed was reported at Wehadkee Creek, where the video was taken. It has been widely shared since, prompting some to believe it was a recent sighting.

“People and alligators can get along just fine and enjoy the same areas without conflict,” Menken said. “As far as danger to people, they’re not really much to worry about. Basically, folks in south Georgia swim in the rivers down there and in Florida all the time and have very, very little problems with alligators.”

Barr said people should just stay away from the alligators.

“If you don’t bother them, they won’t bother you. You just want to avoid the area where they’re at,” Barr said. “I’ve been here since 1992, and that’s the only confirmed sighting that I’m aware of.”

Alligators are native to the Chattahoochee River drainage and can wander up the river to Troup County, according to Menken.

“I have seen them as far as Franklin up there,” Menken said. “That’s a little bit farther north than people traditionally think of being in their habitat, usually down in Columbus over to Augusta, the fall line and south. It’s primarily where they’re found, but they do wander north up the river drainages, not infrequently.”

Menken said to avoid conflict at a lake or creek, give the alligators space, survey your surroundings before you jump in shallow water and do not feed them. Menken said feeding the alligators habituates them to associate humans with meals.

“Alligators that are in the wild and are doing their thing and behaving and catching food on their own, they’re very little danger to humans,” Menken said. “The one thing to think about it is if you have small animals, dogs, things like that, those do occasionally get viewed by alligators as prey items.”

Menken said alligators usually do not hang around docks or people.

“At any given time, there’s probably several alligators in West Point Lake and around the vicinity there,” Menken said. “But by and large, they hang out on the bank, and they’re hunting for small prey items like fish or turtles or snakes.”

For fishing at banks, Menken said alligators will sometimes confuse bait for prey.

“Occasionally you’ll have alligators trying to eat your fish bait,” Menken said. “If you’ve got a situation like that, just move down the bank and away from the alligator, that way you’re not attracting him and causing him to get injured if he was to get your lure.”