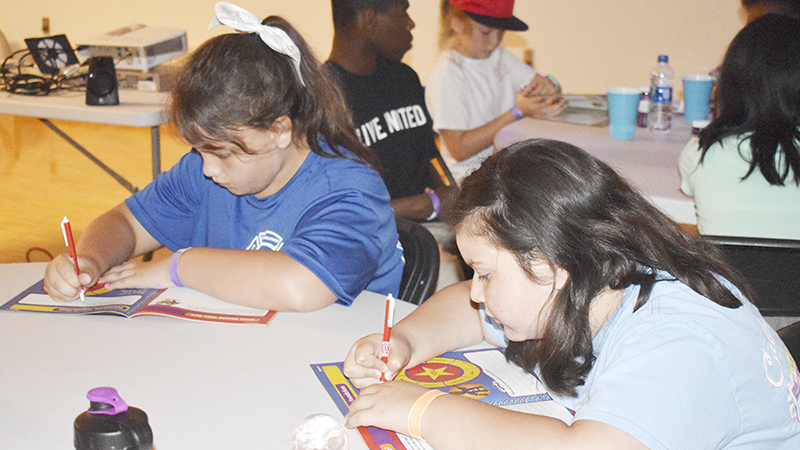 Participants in the LaGrange Police/Fire Department summer camp go through a workbook on bullying. Students will graduate from the camp Friday before a new set of students take part next week. --Gabrielle Jansen

The LaGrange Police/Fire Department Youth Camp is wrapping up its first week. The departments teach children what they do in addition to doing activities for groups of 7 to 9-year-olds and 10 to 12-year-olds.

This week, children have toured both departments, saw a K9 demonstration and learned about internet safety and bullying. LPD Sgt. Marshall McCoy said his favorite part of the camp is when the children meet with the other local agencies.

“I think the static displays are always fun because that’s where the men and women from various agencies — whether it’s from the fire department, EMS, the U.S. Army Corps of Engineers, DNR — all of these guys and girls come out and they get a chance to talk about what they do, and the kids really like that,” McCoy said. “They get to see everything up close and personal and get to try on some of the gear. For whatever reason, I think their favorite is probably our tactical unit, our emergency services unit. They like the helmet.”

Part of the camp included taking the children to the movies and the pool. The campers also played kickball and took part in a crime scene scavenger hunt.

The camp is about education, exercise and making sure the children have fun, McCoy said.

“They really have a good time,” McCoy said.

The camp will hold a graduation program Friday where everyone gets recognized for completion. The staff will also recognize anyone who stuck out as leaders, as well as the fastest boys and girls, McCoy said.

“It’s very different because I’ve always thought that they would have been on the helping side and not the teaching side,” said participant Grace Turner.

LFD Sgt. Matt Oubre said the camp is great for the children.

“These kids are really good, they’ve stepped up, showed leadership amongst themselves, and I think they’re learning a lot of great stuff,” Oubre said. “A lot kids just want to sit home during the summer, and it’s great that they come out here and kind of open the doors for us to share some stories with them.”

About 40 children participated this week, and 50 children are expected for next week, McCoy said.