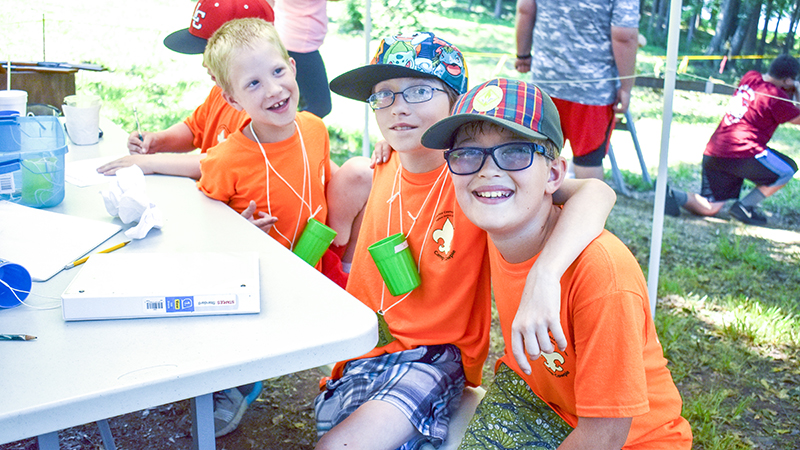 Contrary to its name, Camp Cowpie is not held for cows. The annual Boy Scout camp wrapped up Friday after having 57 children engage in nature, arts and crafts, marksmanship, archery, games and physical education and scout activities.

Camp director Martha Evans said the camp got its name in 1972 when then district executive Travis Johns tried holding it on a pasture.

“It was in a pasture, and there were all these cow pies in the pasture,” Evans said. “And when the steam hit those cow pies, they just started up. And [Johns] said ‘we shouldn’t call this Cub Scout Camp, we should call this Camp Cowpie.’ So, when he came to LaGrange in [the 1970s], he brought that name with him.”

Evans has hosted the camp for 40 years, and it is now held at her house in LaGrange. She said in that time, she’s even had LaGrange Mayor Jim Thornton attend the camp.

“A lot of the businessmen here in LaGrange you will find came to Camp Cowpie,” Evans said.

This year’s theme for the camp was medieval times. A blacksmith was a part of the camp, and campers made crossbows and used a catapult.

“The Boy Scouts built their program around the knight’s code, and that was the code of loyalty and honor,” Evans said. “Lord Baden-Powell wrote the Boy Scout code using that as an example, so we’re Camp Ca-moo-lot this year.”

Each of the groups this year were named after King Arthur’s roundtable.

“Back in the day, they day they had archery. I don’t think they had quite invented BB guns yet,” said participant Anderson Moore.

Moore said he learned to use a sun dial in nature this week.

“What our purpose is, they probably spend more time outdoors in nature during this one week than they do in the whole year,” Evans said. “We try to have it where they have things that they might not have at any other program.”

The camp ends with awards and then playing on a waterslide for the boys.

The camp is not exclusive to LaGrange Boys Scouts, and participants don’t have to be involved in the group, Evans said.

“It’s just been great meeting new friends along the way,” Broderick said. “(It’s) the best way to introduce you to the wildlife and all of these fun activities starting from a [Tiger Cub Scout] in first grade. It’s really fun. I was really scared when I came here, but now I’m with all of my friends. I’m really excited.”