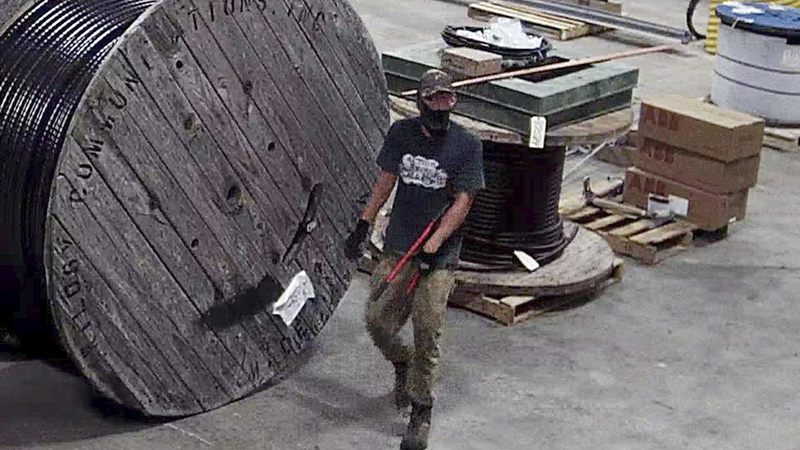 The Troup County Sheriff’s Office is looking for a man allegedly involved in stealing numerous chainsaws from Diverse Power on June 9.--Contributed

The Troup County Sheriff’s Office continues to look for a man who stole more than 20 chainsaws from various Diverse Power trucks.

The man then allegedly stole a white pickup truck, which TCSO said was recovered in Grantville.

The thefts occurred on June 9 around 4:22 a.m. The suspect is a white male, who entered a secured lot at Diverse Power on South Davis Road.

Video of the incident shows the man walking in an area of numerous Diverse Power vehicles and coming back with chainsaw after chainsaw.

The video can be viewed on The LaGrange Daily News Facebook page.

A tool shed was allegedly burglarized at the 100 block of Youngs Mill Road between Sunday at 6 p.m. and Monday at 9 a.m.

The owner told police that items taken included a Mossberg 12-gauge pump shotgun, a tool box, a jack, a drill and various tools.

According to the police report, the shed was found open and unsecured.

According to a police report, a 2008 Ford Mustang was allegedly stolen at the Wood Glen Apartments between 3 a.m. and 8:30 a.m. The owner told police when he woke up Monday morning, he realized his keys and iPhone X were missing from his bedroom.

In a separate incident, a 1998 Honda Accord was stolen on Heard Street between 3 a.m. and 5:19 a.m. The owner told police she left the vehicle unlocked with the keys under the front seat.

According to the police report, the owner left her wallet and cell phone in the car.

According to the police report, the vehicle was valued at $1,800.

A vehicle’s tire was slashed at the parking lot of Sewon America Tuesday.

According to the police report, the owner said this was the second time her tires were slashed, and the last incident occurred on June 6.

These reports are compiled from  various law enforcement agencies within Troup County.

County to vote on new logo