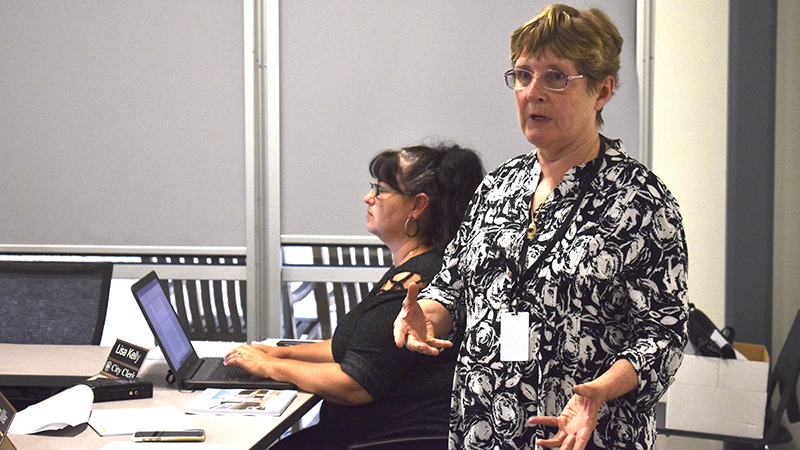 The City of Hogansville presented the next steps for the downtown master plan at its town hall meeting at the library Thursday. Plans include re-purposing the PNC Bank building as the City Hall, expanding the Tower Trail and replacing the Royal Theater’s roof for community arts and entertainment.

“It was recommended that we create a mix of unusual businesses here and unique that would draw a regional crowd, and that is happening,” Miller said, mentioning Karvela’s Pizza and upcoming Pedal Forward bike shop. Other plans include finding prospects for the former library, creating a downtown zoning district and encouraging additional downtown housing.

“We have a building that has to be demolished and that is on College Street. That’s a dangerous building, but the owner of that building wants it demolished,” Miller said. “She is committed to rebuilding housing there.”

Miller said the Downtown Development Authority, Hummingbird Festival and Pioneer are planning having on consistent events. The DDA is also scheduled to meet with the Georgia Conservancy to discuss other ideas for implementing the plan, Miller said.

In August, the city will take the plan to the Georgia Department of Community Affairs and apply for tax credits. Miller said the next phase of the plan is for the city to enlarge its target area for low income senior housing by Stoney Ridge on Lincoln Street.

“If we can expand the target area in different directions for different phases of our revitalization plan, then we can seek some assistance to help with that,” Miller said.

Citizen Roseanna Prado asked if there would still be citizen committees to help plan the theatre revitalization. Miller said the master plan is still being finished.

“I would think anyone interested in how to bring that vision and helping with the practical aspects of that should contact city hall,” Miller said.

Theresa Strickland and Reginald Jackson were the only Hogansville City Council members who did not attend the meeting Thursday.

To review the master plan along with other topics discussed at the meeting, visit cityofhogansville.org.

Working on a full house: Poker run held to…