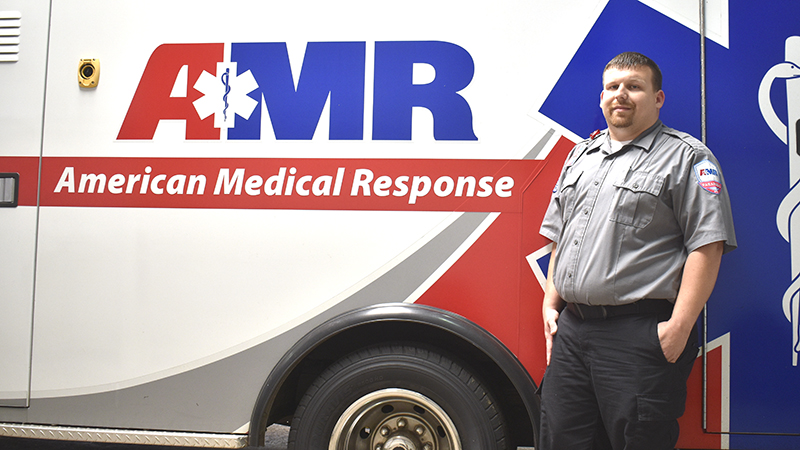 Randy Nichols, a Troup County American Medical Response paramedic and education director, was named one of 100 2018 Star of Life recipients by the American Ambulance Association last week. The award is one of the highest honors an emergency medical service processional can receive, according to an AMR press release.

Nichols was recognized at the Stars of Life Event in Washington, D.C. on June 12. Nichols said he was the only paramedic from Georgia at the event.

“It was an unexpected honor,” Nichols said. “It was a big ordeal. You get to meet your congressmen and senators among other star (recipients).”

Along with seeing the capitol, Nichols said one of the biggest things was hearing how other paramedics were nominated.

Originally from Heard County, Nichols was a mechanic for ten years and worked on law enforcement and emergency vehicles before joining the Heard County Fire Department.

“My job was to work on police cars, fire trucks and ambulances. Being around the people, talking to the people about things they’ve done, people they get to help swayed me to do that,” Nichols said.

Nichols decided to work for Troup County AMR since they have a high call volume and has been with them for four years.

Nichols started and developed Basic EMT and Advanced EMT classes, along with developing level three instructors at Troup County AMR. Nichols said the classes he started had not been set up in the region in their company and is now the framework for other emergency medical services.

Nichols said his favorite thing about his job is making a difference in people’s lives.

“I like teaching, helping other people of course, even with their careers starting out,” Nichols said. “We just finished our fourth class yesterday, as a matter of fact, and in the last class we hired everyone out of the class who wanted to come and work here. It’s rewarding to me that we can be an ambulance service and teach the class, so we can offer some people jobs. It’s rewarding to see some people grow into EMTs and paramedics, and also work alongside of them as well.”

Outside of work as a paramedic, Nichols said he likes restoring classic cars, including his 1948 Chevy truck.

“Word has gotten out about the success of the AMR LaGrange education programs, and we are now hosting four classes and have a waiting list,” the AMR press release said. “Mr. Nichols’ compassion for his team and his never say no attitude has earned him the respect of his peers, and he was a natural choice for nomination for the Stars of Life.”