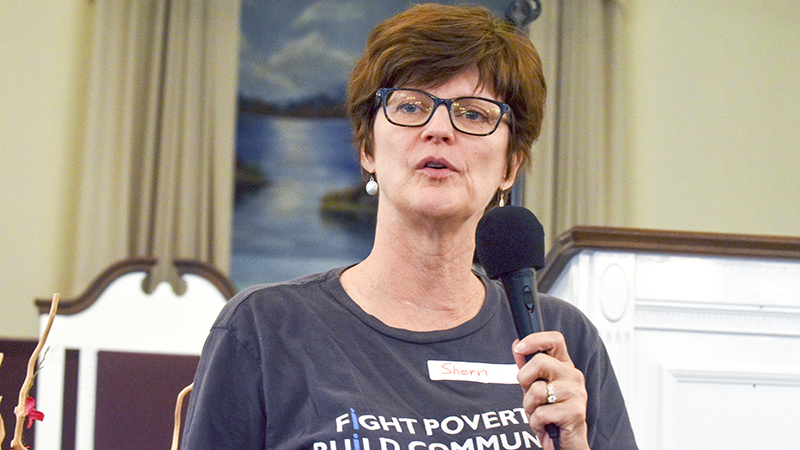 Circles of Troup Director Sheri Brown speaks at the raffle and Circles meeting Thursday. The nonprofit made their $5,000 goal. (Gabrielle Jansen | Daily News)

Circles of Troup County achieved its $5,000 goal for funding Thursday at its raffle with Martina McBride’s foundation, Team Music is Love. The raffle and Circles meeting occurred at Southwest LaGrange Baptist Church.

The nonprofit raised $2,500 through the raffle for two premium section tickets, a meet-and-greet and backstage photo with McBride. Funds raised were matched 100 percent by Sweetland Amphitheatre.

Circles of Troup is a program that teaches people how to move out of poverty to self-sufficiency.

Circles was not approved for funding for the 2018-2019 fiscal year from the City of LaGrange in May.

Team Music is Love, which does charity events in cities McBride tours found Circles of Troup online and reached out to them about doing the raffle before McBride’s concert Friday.

“When we got the word at 6 in morning (about losing funding) we were all texting each other kind of like ‘oh my gosh, what are we gonna do?’ and we whined for about five minutes, which is about all we allow,” Circles director Sherri Brown said. “Then [Circles coach Holly Roberts] texted the group that this is an opportunity for learning and growth … what we teach is what we all need teach each other and hold each other accountable for. It was a powerful day because it was a hard day, and it was a hard thing to hear. Then just a few days later, I get this email from this woman I had never heard of from this organization I know nothing about, and I figured somebody told her about us. It turns out nobody did, which is insane and she tells me who she is and she said ‘I’m going to be in town the night before the concert, do you want me to talk?’”

Brown said after talking with Sheila Jones, the director of Team Music is Love, about doing the raffle, she went to Sweetland director Keyal Loveland about having a sponsor match. Loveland agreed to match up to $2,500.

Jones spoke at the raffle about her own personal experiences of domestic abuse and a family friend, Joyce, who she lived with after leaving her home at 18. Jones said Joyce found her in the woods by her house when she ran away from her abusive father.

“Joyce is literally the reason I am standing here today. She is the reason I made it, not only did she save me in the woods that day, but she equipped me for life, and that’s a lot of what Circles does, what I’ve been reading about. Circles equips people. That is so important,” Jones said. “She taught me to see myself as a valuable person with great promise — not someone who had to live less than a full life because I came from something broken — and I think that’s something from Circles that is very important.”

Brown said they raised exactly $2,500 with the raffle. Courtney Pitts won the raffle.

Shared Spaces: Sculpture looks at what it means to…