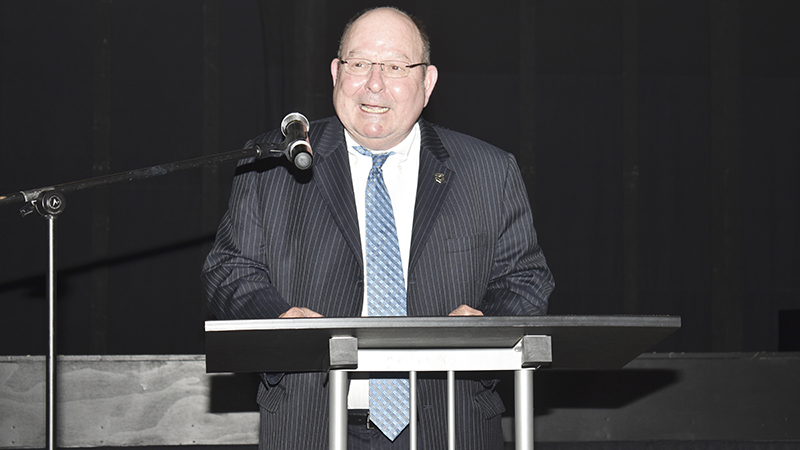 Vernon Keenan, director of the Georgia Bureau of Investigations speaks Thursday at First Baptist Church on the Square. -- Gabrielle Jansen

Georgia Bureau of Investigations Director Vernon Keenan spoke about the agency Thursday at the First Baptist on the Square’s men’s luncheon.

Keenan joked he became director because he outlasted everyone else his age at the GBI. Keenan started his career as a police officer in 1972 at the Delkab County Georgia Police Department before joining the GBI in 1973. He was appointed the director in 2003.

“I went to school to be a history teacher,” Keenan said. “And at the time in 1970, the federal government came out with grants that if you agreed to become a police officer and work for five years, they would pay your tuition at college.”

The GBI runs the criminal information system and responds when local law enforcement makes inquiries during traffic stops or checking out suspicious persons.

“In our agency, we operate between extremes — crime against children, crime against the elderly, disabled adults and then everything in between,” Keenan said. “The way we operate, we meet the needs of the local law enforcement agency.”

The GBI works an average of two cases a week investigating officer shooting incidents, according to Keenan. Once the GBI finishes its investigation of the use of force incident, it goes to the district attorney’s office to decide if it was justified.

Keenan said the “vast majority” of use of force cases the GBI investigates find the officer acted correctly because they prevailed in a gun battle. Keenan said he has told members of the media that Georgia’s rate of use of force incidents is not “unique” since other states have similar rates.

Keenan also said Troup County has a great sheriff, police chief and district attorney’s office because they work together.

“In some other parts of the state, the sheriff and the police chief can’t even be in the same room together, and they don’t talk to the district attorney,” Keenan said.

Georgia Republican Governor candidate Casey Cagle made a short appearance at the luncheon and talked about the economy.

Inmate charged for allegedly conspiring to kill someone on…