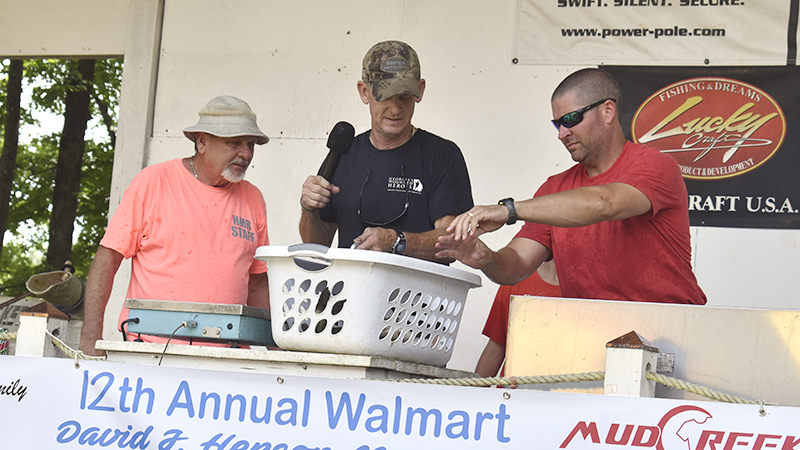 About 43 boats were out on Highland Marina Saturday for the Walmart Distribution Center’s 12th annual bass fishing tournament. All of the proceeds were given to the Children’s Miracle Network.

The tournament was also dedicated to David Henson, one of the center’s managers who died last year. There was a table at the tournament honoring Henson’s memory.

“It’s a fundraiser Walmart is real big on as doing fundraisers for this foundation,” said Vickie Steele, the general manager’s assistant. “We had lunch for all the fishermen.”

Steele said about $6,000 to $8,000 is raised from the tournament annually. The distribution center gave $50 gift certificates as prizes as well as cash prizes for the winners. Eric Rull and Dalton Guest won the tournament by reeling in 18.6 pounds of fish. Rull said they’ve competed six or seven times.

Rull and Guest won a $2,000 cash prize. Steele said while they have fundraisers at the warehouse all year, the fishing tournament is their biggest and has the largest turnout.

“It’s just a fun activity for us to do,” Steele said. “We enjoy it and we enjoy seeing the guys who come out to fish, and it’s a good fundraiser for us.”