Twenty Under Forty: Ayers is leading change in Hogansville with coffeehouse, pub 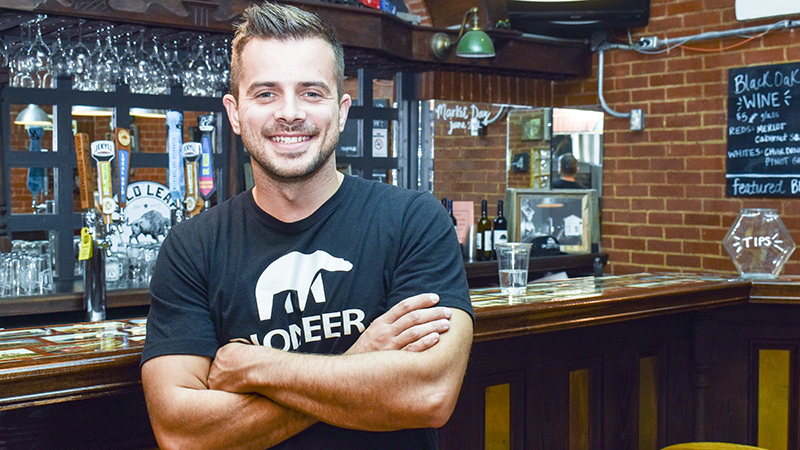 For Pioneer co-founder Jake Ayers, the organization’s name holds a lot of meaning for downtown Hogansville. The organization has brought in Station Coffeehouse, The Great Southern Pub and the event space in the city’s train depot.

“One of the definitions of pioneer — which is interesting because we didn’t come across this until later on — is an organism that sparks new life in a new community. And so that’s really what we wanted to be,” Ayers said. “We didn’t want to come in and take over and change everything, we really wanted to be an organism that would spark new life in this community and then people in the community would start seeing the vision, jumping on board and taking ownership themselves.”

Ayers, 30, is originally from Newnan. He studied aspects of leadership at Hillsong International Leadership College in Sydney, Australia for three years.

After his time in Australia, he met Tim and Matt Morgan of Hogansville, and they worked on a film project called “Band of Rogues” in Mendoza, Argentina in 2010. Ayers said they wrote the script and the music, shot and produced the film and took it to some festivals.

“In 2013, 2014, we moved around and started talking about the idea of pursuing more projects, business ideas that we had, and we just decided that Hogansville would be the perfect slate because Tim and Matthew are from Hogansville,” Ayers said. “They grew up here in Hogansville so, the Morgan family approached me and was like ‘hey Hogansville has a beautiful canvas, how can we take our dreams and the things we want to do with business and arts and films and development and do it right here in Hogansville?’”

Ayers has been married to wife Nicole for five years, and they have 8-month-old son Leon. Along with Pioneer, Ayers serves on Hogansville’s Downtown Development Authority Board, is in charge of the Hogansville Business Council and is on the executive committee for the LaGrange-Troup County Chamber of Commerce.

Pioneer officially launched in 2016 and started with their office on Main Street. From there, they took on the train depot with the coffee house, then the pub and depot event center. Ayers said the monthly market days, where vendors from the area come together for one evening, resulted from everything else.

“A lot of that is the desire to bring people to the community but also have a platform for people in the community to showcase things that they are passionate about. We have a lot of different types of artists, artisans, people who make things with wood and metal and pottery all kinds of stuff like that, so we want to be able to have place for people to showcase their work as well,” Ayers said.

Twenty Under Forty: McCoy’s work includes serving on the…