Twenty Under Forty: Loveland right at home in job as director of Sweetland Amphitheatre 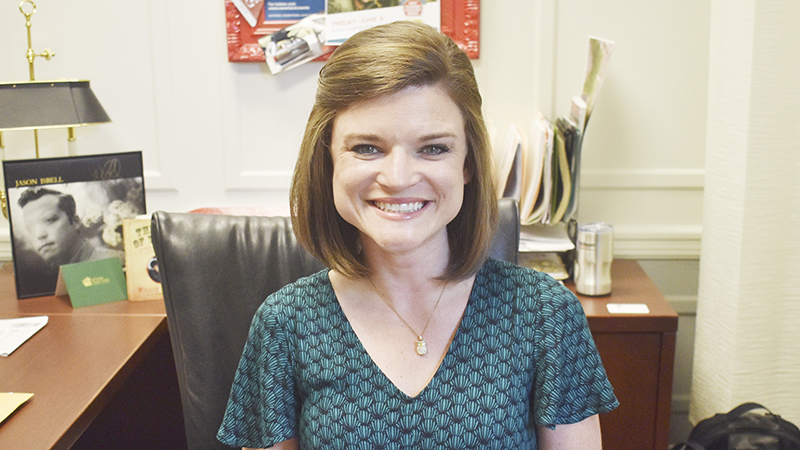 Before Sweetland Amphitheatre director Keyal Loveland was in LaGrange, she was already running a small music venue in Opelika, Alabama. Loveland ran and operated The Hoot Yard for about a year and a half before she and husband Josh moved to West Point.

“My husband and I were living in Opelika, and I actually passed a Sweetland billboard on the interstate about two and a half years ago,” Loveland said.

“I reached out and sent my resume to their website, and just a few months later, Sweetland reached out to me. I started a part-time job here shortly after, which prompted my husband and I to start looking for houses and land in this area, and we found a deal we couldn’t resist in West Point.”

The Sweetland director started part-time three years ago. She then went full-time as the in-front of house managemer before being named director in January.

“I would say that Sweetland is bringing the community together in a wonderful way by hosting nationally recognized artists and also hosting community events that just bring everybody together in a very authentic way,” Loveland said.

Loveland will turn 30 in July. She was born in Houston, Texas, but grew up in Dothan, Alabama.

Loveland graduated from Auburn University with a degree in communications and psychology.

Loveland met her husband in Auburn even though they both grew up in Dothan without knowing each other. They will have been married for three years in November.

“We met in the music scene in Auburn. He’s a musician as well,” Loveland said.

“He’s a drummer. I was more interested on the behind the scenes of the music scene.”

Loveland said she doesn’t play an instrument but leads singing worship at her church.

“I don’t know that I have a favorite (music genre), I would say probably funk and soul music would be my go to regularly,” Loveland said.

Folk and Americana music are a close second for her.

Loveland and her husband own two dogs and four cats that they consider their children.

“We are animal lovers. We have eight-acres, so we kind of use that as an excuse to have an animal refuge,” Loveland said with a laugh.

Outside of working at Sweetland, Loveland is on the board for Holden On, an organization for mental health awareness and suicide prevention.

“My husband and I love hiking, biking. We backpack whenever we can and play music, meaning I sing, he plays,” Loveland said. “We go to concerts regularly — as much as we can.”

Twenty Under Forty: Car wreck inspired Daniel to get…