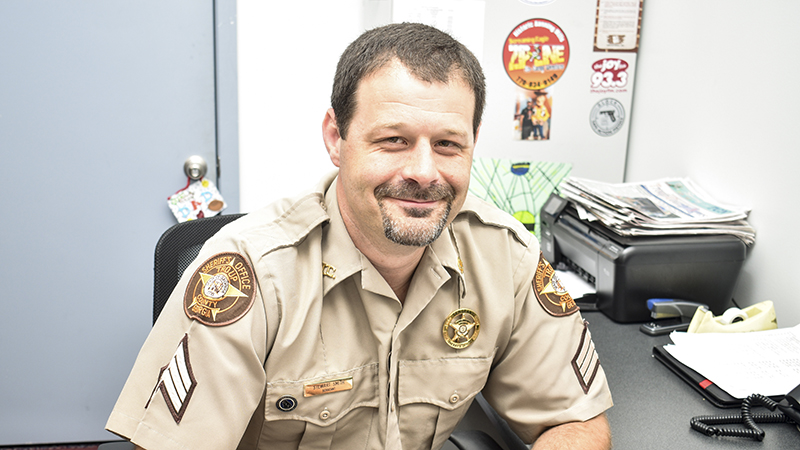 Troup County Sheriff’s Office Public Information Officer Stewart Smith does a lot in his position. He joined the TCSO through the sheriff’s explorer program.

“[Sheriff James Woodruff] was one of the advisors in that program, and he took me under his wing and everything,” Smith said.

The 39-year-old said his family moved from Birmingham, Alabama, to LaGrange when he was about 7-years-old.

“My dad worked with Pepsi-Cola in Birmingham and got transferred here to LaGrange as, I think, an assistant plant manager, and we’ve been here ever since,” Smith said.

Smith graduated from Troup High School in 1996 and began working for Troup County as a 911 dispatcher in 1998. He applied for the sheriff’s office in 1999.

“I always wanted to be a police officer or in the military or something, and had the opportunity to do that,” Smith said.

“I’ve been with the county now for about 20 years.”

Smith worked for a year and a half at the sheriff’s office before returning to 911 as an assistant supervisor trainer. He worked there until January 2013 when Woodruff was elected sheriff and came back to the TCSO as the PIO.

Smith met his wife, Aleisha, when they were 18 and working at Winn-Dixie.

Aleisha now works as an elementary school teacher in Meriwether County. They have two daughters, Madyson and Karah.

As the information officer, Smith runs the junior deputy program where he goes to third grade classes at all of the schools throughout the county and teaches them about the importance of education, home and bicycle safety and saying no to drugs and alcohol. He also runs the explorer program, coordinates the citizen firearms courses, neighborhood watches, runs the sheriff academy summer camp, handles the offices social media accounts and responds to the media.

“When we have major incidents, I’m the one out there, getting the story across, and it’s my job to make sure that the story is accurate and the message is portrayed that way, and if any questions come across, I am able to answer those,” he said.

Smith said one of the favorite parts of his job is that he gets to interact with people in the community.

“I don’t know if I am necessarily making a huge difference, but I do think my work in the schools and that third-grade program gives me an opportunity to show the kids a different side of law enforcement. We’re not just there to take people to jail or pull people over. We’re actual human beings,” Smith said.

Outside of work, Smith said he enjoys spending time with his family, going to high school football games and flying his drone.