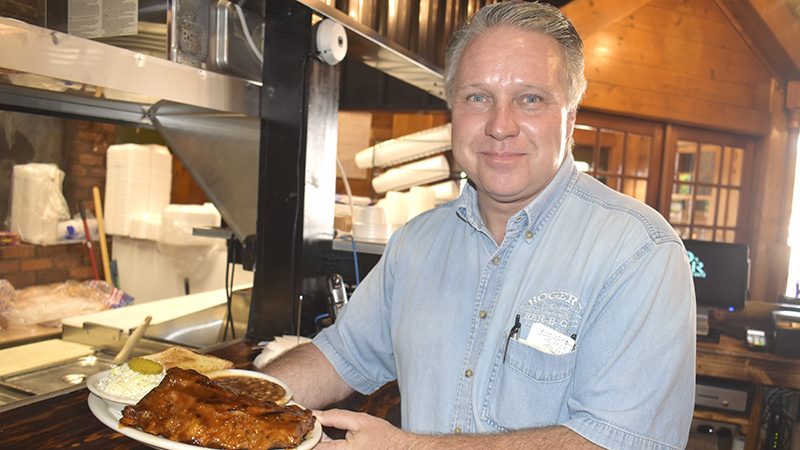 Randy Striblin, owner of Roger’s Pit-Cooked Bar-B-Que in Hogansville, poses for a photo with a plate of food Thursday at the restaurant. Roger’s had a fire in March, forcing the restaurant to close until last week. --Gabrielle Jansen

Roger’s Pit-Cooked Bar-B-Que in Hogansville is back in business.

The restaurant temporarily closed after a fire that caused extensive damage to the restaurant on March 21. The fire started in the pit and moved into the building’s attic.

“We got all our inspections done and approvals and all that kind of stuff, and we were ready to open,” Striblin said.

Striblin said business has been good because people have been talking about the reopening and through word of mouth and Facebook. Since its closure, Striblin said they have remodeled the restaurant, including adding metal to the walls and ceilings and replacing the fryers and the freezer.

“We remodeled in here while we had the opportunity, so we think people are really going to like it. It’s kind of a cross between an industrial and farmhouse look,” Striblin said. “We’ve had really, really good reviews from people so far who have seen what we’ve done. We’re excited that things are coming together.”

Striblin said customers and friends from the area were approaching him in public and asking him when Roger’s was reopening.

“I’ve been really excited to see my old customers and friends who I haven’t seen in a while,” Striblin said.

Striblin said they’re still putting things, in place including trying to streamline processes for customers and employees. They are also working on organizing the party room, opening up the larger room and lighting fixtures.

“We still have a few more things to do, but we’re trying to get it done,” Striblin said.

Striblin joked that all of his employees are happy to be back to their regular duties instead of cleaning and fixing the place.

“We appreciate everyone’s support through the process and their patience on us getting back open and we’re excited about the response that we’ve gotten so far of everyone coming in,” Striblin said.

Customer Teresa Brown said it was her first time visiting the restaurant and that the food was good.

“It’s funny because I was sitting here thinking I like the wood and the way it looks. I’d have never known [they] had a fire,” Brown said.