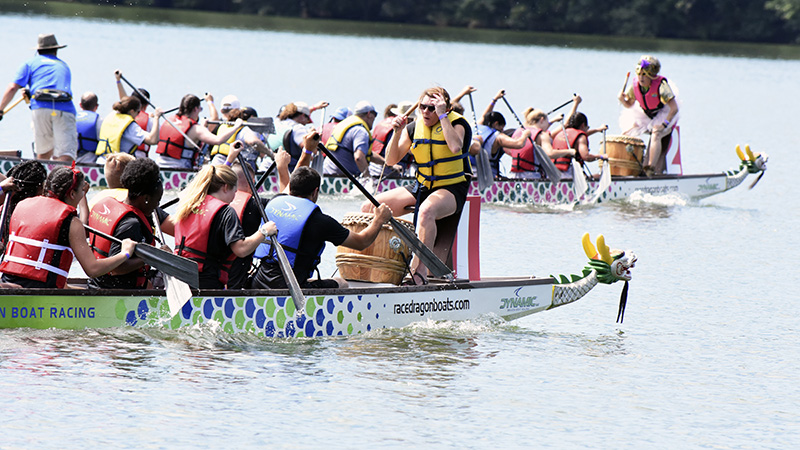 Thirty local teams made up of 20 paddlers, a drummer and a professional steerer will race against one another in 46-feet long dragon boats across the lake. The event is also a festival for spectators and will include food vendors, drummers and an emcee, according to Harmony House director Michele Bedingfield.

“It’s a festival type of atmosphere so the atmosphere is very fun and each team competing gets to set up their own little tailgate area, so it’s very family friendly,” Bedingfield said.

Bedingfield said the idea for the regatta came when Troup County Solicitor General Markette Baker saw dragon boat racing in another community and told former Harmony House board president Ginger Zackry about it.

“We used to have Flamingoes in Paradise which was a reverse raffle, and then we had a ladies-only event, which was a silent auction,” Bedingfield said. “Ginger just thought that this was one event that could bring a lot more awareness, a lot more education and a lot of fun, and we have a beautiful lake. West Point Lake is the second largest lake in Georgia, and we have that great mega ramp, so it was like everything just lined up perfectly for it.”

All of the proceeds go toward Harmony House, Bedingfield said. The shelter will have a resource table and will be selling T-shirts at the race.

“The point of the fundraiser is to obviously raise money, but it’s also just to bring awareness to let people know that there is an organization in their own community that they can reach out to,” Bedingfield said.

Like last year, those who attend can pay $1 per vote for favorite team name, favorite tailgate area, favorite drummer and best team spirit. This year Bedingfield said attendants can vote via an app at the tailgates instead of waiting in line. Voting ends at 12:30 p.m.

Bedingfield said they made their $40,000 goal last year.

“It’s because of the community that we are able to have this be successful and to do what we do,” Bedingfield said.

The top three teams will win trophies and the voter’s choice winners will be given plaques, according to Bedingfield.