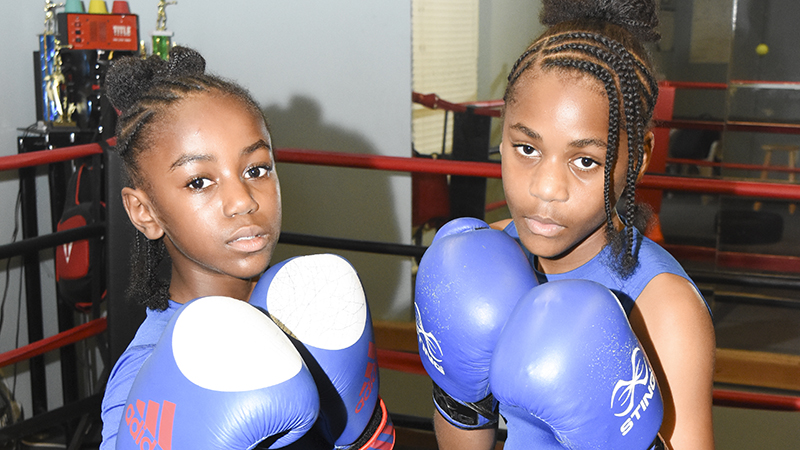 LaGrange sisters Dymond and Shamiracle Hardaway joke that one of the reasons they picked up boxing was to deal with a bully if they ever had one. That probably won’t be a problem.

“They push me, saying ‘hey, we’ve got to train today,’” said their dad, Randy Hardaway, who owns Back 2 Basics boxing gym in LaGrange. “They do it because they want to do it. They love it, and they told me they were born to do this.”

Randy said that two sisters winning a Junior Olympics tournament is extremely rare, and he said the feat has been recognized by people all over the country.

“This is history. Two sisters won a big, major tournament at the same time,” he said. “That’s a big deal.”

“It was my time to shine and to show everybody around the world who I can be,” Shamiracle said.

The rankings on the TeamUSA website have not been updated since April 2, but in those rankings, Shamiracle was No. 3 in her division and Dymond was No. 2. Randy said when the new rankings come out, he’s been told both sisters will be ranked No. 1.

Boxers have a coach to talk to between rounds, but few have another family member going through the same grind that they can rely on. Together, Dymond and Shamiracle keep each other loose before bouts, often picking on one another to calm their nerves.

Randy said everyone else laughs watching their antics.

“All the coaches are just looking at these two sisters because it’s funny,” he said. “Two peas in a pod.”

Both sisters started fighting at age 8. Shamiracle got into boxing after spending a lot of time at the gym as a young child.

“I enjoy boxing because instead of me sitting in the house not doing anything, I can motivate myself and have discipline, and I can train,” Shamiracle said.

Like most sisters, Dymond saw Shamiracle enjoying it and decided to try it out.

“I thought it was fun, so I wanted to do it,” Dymond said.

Randy, who once had plans to become a MMA fighter, was a little hesitant at first. As a former boxer and a current boxing coach, he knew the physical toll the sport could take on the body, but he and his wife, Shantra, signed off.

“These are my daughters. My thing with them was I saw they were tough, and they wanted to do it. I knew what it took, and they listen and work hard,” Randy said.  “They had some times where they had some sparring matches that were real tough, but they stood in there, and I knew it would make them better.”

The siblings have won so many championship belts that it’s hard to remember which one they won first.

On Friday, they lined some of them up on the boxing ring for photos, barely squeezing them in.

What makes them so good? It’s probably best to ask the person they spar with the most — each other.

“She’s really best at using her power,” Dymond said of Shamiracle. “The best thing about her boxing to me is she can move her head a lot, and she can also use the power.”

Shamiracle may have more power, but Dymond, who also runs track, has the speed.

“She sometimes sets things up and uses fast punches to set up power,” Shamiracle said.

Both have other talents as well. They both like to sing, and Shamiracle loves to dance. Shamiracle is a rising sixth grader at Gardner Newman Middle School and Dymond will be a fifth grader at Franklin Forest Elementary School.

One day, Randy said they both plan to consider a professional career in boxing, while also keeping their eyes on another big dream — the Olympic games.

“[Shamiracle’s] 12, so we’re looking at 2024 for her,” Randy said of the Olympics. “Right now, even though they are young, as they get older, [Olympic judges] are watching them.”

No matter where their future leads them, they’ll likely rely on one another to get there.

“When your sister has your back, you can train together and help each other out,” Shamiracle said. “It’s just perfect.”

Moore’s sculptures to be displayed in LaGrange