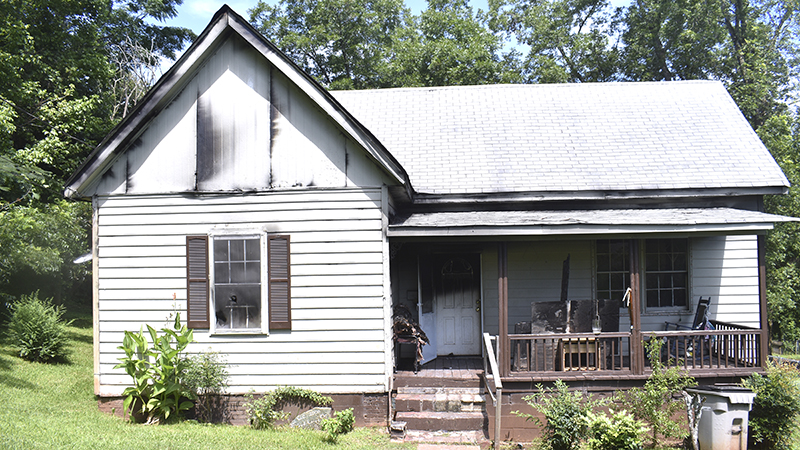 A structure fire occurred on the 700 block Ridley Avenue Sunday. No one was inside the home at the time of the fire. --Gabrielle Jansen

No injuries were reported in a fire on the 700 block of Ridley Avenue Sunday morning. According to a LaGrange Fire Department press release, fire fighters were called to the scene at 11:47 a.m. and the fire was suppressed by 12:37 p.m.

The structure is still standing even though all of the inside is a total loss, according to Quincy Favors, daughter of homeowner Sara Ford. The house is also owned by Ford’s brother, Charlie Daniel Jr.

Ford was at church when the fire started, according to Favors.

“I was at Walmart, and I got a call from my sister, and she told me that my mom’s house was on fire. When I got there, the fire department was there, and they were putting the fire out,” Favors said. “Someone brought her from church, and we just sat across the street at [a friend’s] house praying that it would be safe to go back in. We went inside and everything was destroyed.”

The one thing they were able to save was a picture of Ford’s paternal grandfather, Favors said.

According to the press release, the fire started in one of the rear bedrooms and the cause was electric. The total cost of damages was estimated to be $31,500.

“[I’m] just hoping to get everything straightened out soon,” Ford said.

Ford’s pet dog was on the porch when the fire started and a passerby held him until Favors arrived.

Ford’s son, Michael Ford, said the house had been standing since 1925 and was often used for family gatherings.

Ford is staying with family members living in the area. According to the press release, the American Red Cross was contacted to provide assistance.

Favors said they were thankful for the LaGrange Fire Department’s assistance and the community’s response.