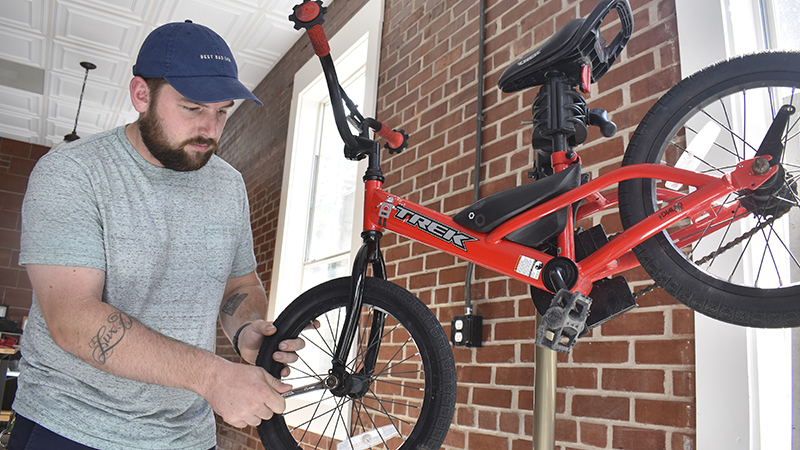 Alex Abraham works on a bicycle at Pedal Forward in Hogansville on Thursday. Abraham and his wife Emilee Abraham run the nonprofit. --Gabrielle Jansen

With recent revitalization efforts in downtown Hogansville, Alex and Emilee Abraham are helping the community’s children pedal forward with their bicycle nonprofit. Pedal Forward was recently certified as a nonprofit that teaches children bike repair and safety along with an earn-a- bike program for children without rides.

“It’s a pretty common thing to hear that Hogansville’s on the rise, but something else I’ve noticed is that there’s nothing for the kids happening here,” Pedal Forward CFO Emilee said. “It was a lot geared toward young adults, young families, but there’s nothing for the youth and so it’s pretty common for our youth in Hogansville to just find themselves getting into trouble because there’s absolutely nothing to do here for them.”

Founder and CEO Alex said he wanted to start a bike shop and came up with the idea for Pedal Forward after a child ran into his parked truck because his brakes weren’t attached.

“I had the idea to start a bike shop because there was so many kids riding around on their bikes, and I was like ‘we need something for these kids to do, a way to teach them how to prepare and keep their bikes in good working order,’” Alex said.

Since starting in June, Pedal Forward has moved into nonprofit Positive Fields headquarters and has taken in bike donations.

“We’re still sharing the space, but we’re kind of doing a mobile bike shop until we get our own building,” Alex said.

Until they get their own space, Pedal Forward will go to where the children are, Alex said. The nonprofit plans on doing an earn-your-bike program, where children will take a two-hour, six-week course on bike repair and safety before they can take a bicycle for free.

“People have just dropped them off here, people have reached out to me like ‘hey, I’ve got bikes,’” Alex said

In addition to bicycles, the nonprofit also accepts unused helmets, reflectors and locks along with monetary donations. Alex said he’s learned that children in Hogansville have stolen parts of bikes, reconstructed them and painted over them.

“Bike theft is huge here as well. You see a ton of spray painted bikes and now I know why,” Alex said. “Literally the whole thing with the bikes is it’s a way to reach the children because they all ride bikes, but we really want to be able to provide a safe and positive space for them to hang out and get to know each other and get to know us and have a positive influence.”

Emilee said they want a safe place for children to hang out, which they hope will eventually lead to a youth center.

“We want to be that safe place that they can come whether it’s after school or on the weekend, just come hang out, be a good influence on these kids and just encourage them just to set a better future for themselves,” Emilee said.

Pedal Forward is located at 201 East Main Street, Hogansville and is open Monday from 3:30 p.m. to 6 p.m. To learn more about the nonprofit, visit pedalforwardhgvl.org/blog.