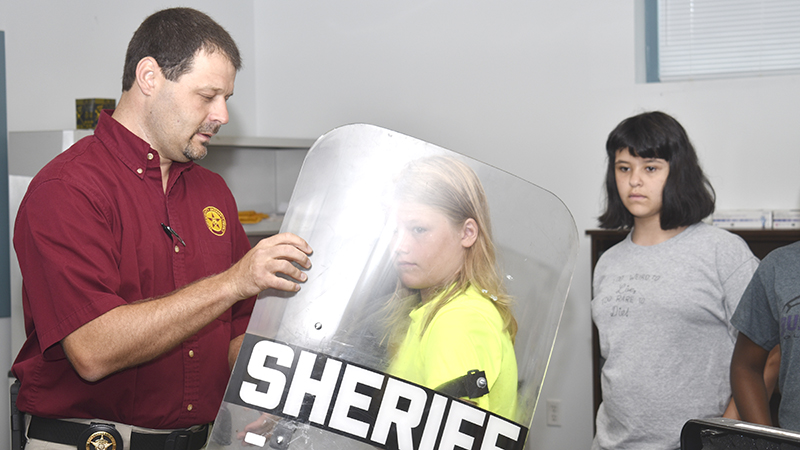 The Troup County Sheriff’s Office is holding its youth camp this week. Above, Sgt. Stewart Smith shows Brooks Tharpe one of the department’s shields. --Gabrielle Jansen

About a dozen 11 and 12-year-old children started their week high-fiving Sheriff James Woodruff Monday at the Troup County Sheriff’s Youth Camp. The camp held demonstrations on each of the departments of the sheriff’s office. The children also go on field trips in the afternoon, such as going to Water Wiz.

“Today we’re doing demos with our patrol division, our investigators and our narcotics division and then after that we’ll head out to [the skating rink],” TCSO Sgt. Stewart Smith said. “Tomorrow we’ll do some more demonstrations. I think we’re doing firearm safety. We’ll do a demonstration at the fire department.”

Officers showed off their vehicles, equipment they use, the sheriff’s office boat and their investigation van. Children were also shown a bag of marijuana the office confiscated and learned about the dangers of drugs.

The camp will also include demonstrations from the Georgia Bureau of Investigations, Georgia State Patrol and the Department of Natural Resources.

“We just came here, and we’re looking around at stuff,” McCall said. “[Patrol officers] go around the neighborhoods and stores at night.”

Smith said the youth camp is the highlight of the year for the officers.

“It’s a good opportunity for kids to see some of the day to day operations and what goes on,” Whitney said.

“Plus, they might make some friendships here that they wouldn’t have otherwise made. It’s a good program, the kids seem to enjoy it.”