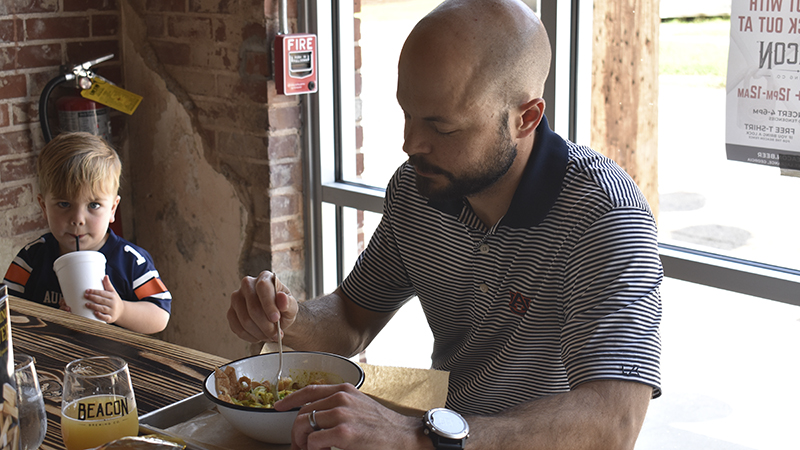 Beacon Brewing employee Amanda Sugermeyer said they held their first soft opening Thursday and have been inviting people through email.

“We’ll have one again next Tuesday and next Thursday,” Sugermeyer said. “I think it’s been pretty well. We’ve had a really good turnout on Thursday night.”

Sugermeyer said the brewpub started brewing its beers two weeks ago and will premier them Saturday at their Rock Out with Your Lock Out event. She said the brewpub will serve IPA and Saison beers.

Owners Chase and Charles Hudson also run Mare Sol and C’sons in downtown LaGrange. Sugermeyer said the brewpubs menu is not the same as the restaurants.

“It’s Korean infusion,” Sugermeyer said. “We sampled a lot of the stuff on our Mare Sol samples. We have our smoker all freshly prepared.”

Head chef Devin White said he purposely created the menu to be different from the other restaurants.

“There’s no place in LaGrange you go that has ramen noodles, so that’s one thing I was like ‘I have to put that on the menu,’” White said.

Casey Martin said she and her husband Robert heard about the soft openings on Facebook and decided to check out the brewpub.

“I’m really impressed. There’s not anything else like this in LaGrange,” Martin said. “We’re excited for the grand opening. We’ll definitely try to come out. I’m really glad they’re in LaGrange.”

The Rock Out with Your Lock Out will be held Saturday from noon to midnight. Bring a decorated lock and post a picture with it on the brewpub’s gate to get a free Beacon T-shirt.

Children save 2-year-old from drowning