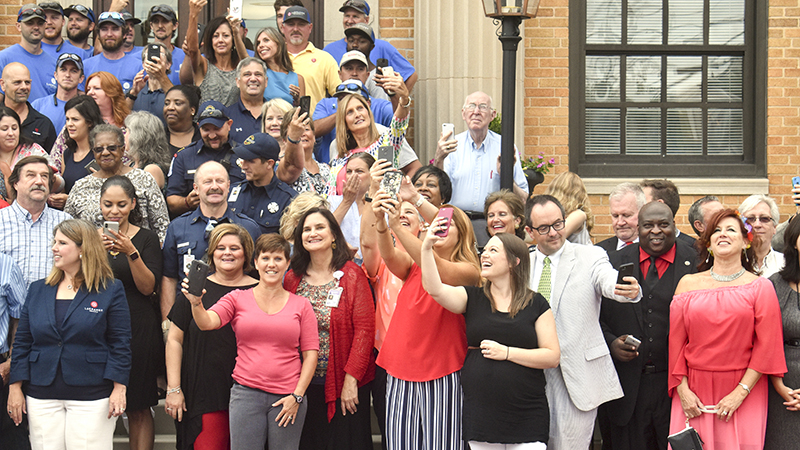 City manager Meg Kelsey said the renovations were made after the front and basement were damaged by a storm from December 2015.

“We realized the cause of the flooding was a root crack in the foundation wall of our historic building,” Kelsey said. “After extensive repairs, we reached out to architect Skip Smith and asked him to help us reimagine the front of our building. He created what you see before you.”

Kelsey thanked the city crews who worked on the landscape, electricity and gas to make the façade what it is.

Next to the bench is also a donated Chuck Moore dog sculpture in honor of Hall, who had bulldog statues outside his office.

“Almost everyone who came to the building would ask about them, while they were there. [Former city manager] Tom loved his Georgia Bulldogs,” Kelsey said.

The city also plans to add bird houses and a tree by the bench in honor of Bell and Hall.

“For 92 years, this building has served as the seat of government for the City of LaGrange,” Thornton said.

Thornton recognized Kelsey for getting the renovation moving.

“It’s in keeping with the theme leaving LaGrange better than we found it, and it applies in lots of different contexts. It applies in the context of picking up litter, which our city’s staff and council members have been doing, but it also applies in the renovation of the front door of city hall,” Thornton said. “When you have to rip off the steps and waterproof the basement wall, why not go back with more inviting steps? Why not go back with a more inviting landscape and streetscape?”

Thornton described the new façade as more inviting to the public.

“This is the public’s building.”

Since Aug. 15 is City Hall Selfie Day, everyone at the ribbon cutting stood on the hall’s steps and the city’s drone took a photo of them.

Many in attendance also took selfies with their own phones.