Airman of the Year: LHS grad honored for service 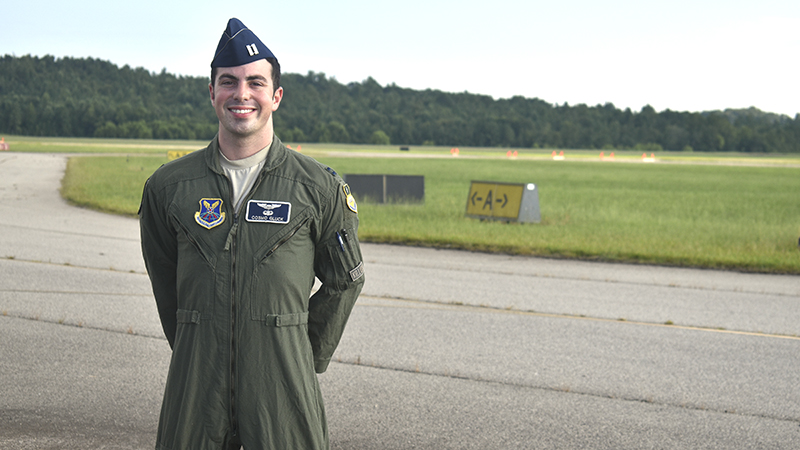 LaGrange native and Air Force Capt. Julian Gluck was named the Airman of the year. Gluck returned to his roots this week and spoke to Civil Air Patrol cadets in LaGrange. (Gabrielle Jansen | Daily News)

Air Force Airman of the Year and former LaGrange native Capt. Julian Gluck went back to his roots Tuesday by visiting the Civil Air Patrol cadet program at the West Georgia Composite Squadron. Gluck talked to the cadets about his experience in the program for 12 to 18-year-olds, pointing to an old photo of him in the squadron’s room.

Gluck said he was surprised when he was named Airman of the Year. His father, Brion, had seen a commercial about it and, with brother Griffin, submitted a package for him.

“I didn’t think much of it at the time because I did not feel deserving in many ways,” Gluck said. “As it kept going further and further into looking like I may actually receive this, I eventually had to brief my leadership. I said ‘there’s this thing. I don’t know if I’m going to get it, but if I get it, they’re going to look to send me to D.C.’”

Gluck got the call when he was in Guam. As the Airman of the Year, he was honored at Washington, D.C., along with other service members of the year.

“It’s an incredible honor that I think thousands of people in the military would be as equally or more qualified for, but I’m proud of the opportunity to represent my squadron, the city of LaGrange and the great men and women in our armed forces who have volunteered to serve both in the military and in their communities,” Gluck said.

Gluck moved to LaGrange with his family when he was in fifth grade. He attended Gardner-Newman Middle School and graduated from LaGrange High School in 2008.

While at LHS, he participated in the wrestling team and the International Thespian Society, in addition to the cadet program.

Gluck said he comes from a military family, his grandparents served and his father served in the Army. Gluck said his family’s history inspired him to join, but rather than feeling obligated, he felt called to the service.

Gluck said he looked into attending a service academy since middle school, and the Civil Air Program helped him prepare. Gluck graduated from the Air Force Academy and went into pilot training after commencement.

His brother currently is a senior at the Air Force Academy.

Gluck, also known by his call sign as “Cosmo,” is currently a bomber pilot with the Air Force’s 20th squadron.  He flies B-52 bomber planes.

Gluck has served two deployments. He participated in Operation Inherent Resolve in the liberation of Mosul in Iraq and Al Raqqah in Syria, and Operation Freedoms’ Sentinel in Afghanistan.

Gluck recently returned from a six-month deployment in Guam as part of the Indo-Pacific Command’s continuous bomber presence mandate. He has also been to Japan and learned Japanese as part of the Language Enabled Airman Program.

Gluck is stationed in Shreveport, Louisiana, and has volunteered with the Civil Air Patrol there. He is also in the Knights of Columbus, a Catholic-based fraternal organization that does charity, and is on its boards at the state of Louisiana and international levels.

In addition to learning something new every day, Gluck said he enjoys the sense of community and team work in crew airplanes.

“It’s a very heavy burden that we have to carry particularly in combat in what bombers are utilized for. Also since the B-52 is a member of the nuclear triad, having the entire nuclear focus in addition to the conventional focus is a lot to carry,” Gluck said. “But there’s definitely a great sense of camaraderie.”

Back in the United States, Gluck said he traveled to LaGrange to speak to cadets in the local Civil Air Patrol, but also to see his family and work on the LHS 10-year reunion.

“Because I was the class president, I am in charge of getting this thing going, and it’s really hard to plan for the reunion when you’re on the opposite side of the world, trying to make phone calls,” Gluck joked.

Even away from LaGrange, Gluck said the city is growing and gaining recognition.

“I was listening to the BBC in Shreveport through my local NPR station, and they talked about a program in Georgia with an environmentally conscious highway system. And I said ‘wow this is fascinating, I wonder where this is?’ and then they said in LaGrange, Georgia,” Gluck said. “This was only a week ago, as soon as I got back from the deployment.”

Gluck said he sat in his car for another 20 minutes to listen to the story on The Ray before calling his mother, Elizabeth, to tell her that LaGrange was in international news.

“There are lots of great small towns in the United States, but there are few I think that are so conscious of where the future has taken them more than LaGrange,” Gluck said.