Attorney of the Year: Kirby honored for work 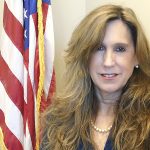 “Receiving this award was an honor and humbling,” Kirby said. “I feel very fortunate to be able to serve the Coweta Circuit and our community in a fulfilling career that I love.”

“When Pete Skandalakis became district attorney in 1991, he named Monique his chief assistant, and the easiest decision I’ll ever make as district attorney was to name her my chief assistant as well,” Cranford said. “Monique has tried more felony jury trials than any other prosecutor in this circuit and is passionate about the difficult work we do.”

Cranford said Kirby has a reputation for being honest and fair.

“She does not count convictions, she simply seeks to do the right thing with each case,” Cranford said. “Monique’s leadership of this district attorney’s office has made it one of the most respected in the state, and the citizens of this circuit should be thankful, as I am, for her continued dedication to serving and protecting this community.”