Farewell to some friends: Four original board members step down 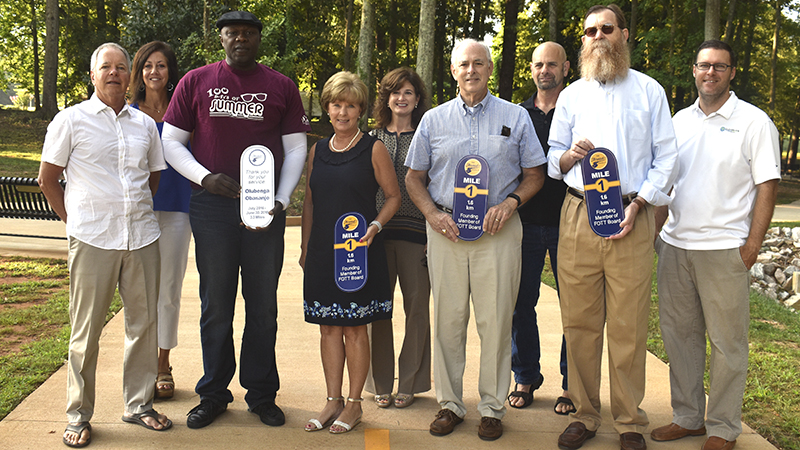 The Friends of the Thread recently recognized some of its original board members who were leaving the board. Friends of the Thread current and former members, Bob Goehring, Natalie Hale, Olugbenga Obasanjo, Judy Freeman, Susan Bowie, Scott Landa, Rick Brock, Zachary Taylor and Charlie Metcalf pose for a photo. (Gabrielle Jansen | Daily News)

The Friends of the Thread recognized four of its original board members who left their positions Friday. Former board members Scott Landa, Judy Freeman, Olugbenga Obasanjo and Zachary Taylor were given personalized mile markers, commemorating their start with The Thread.

Freeman said she became interested in joining the board after seeing the Atlanta BeltLine.

“My daughter lives in Atlanta on the Atlanta BeltLine,” Freeman said. “We spent a lot of time there and we’re familiar with The Path Foundation [that is] also doing our trail system. We absolutely see what happens to a community when a trail system goes through it, it’s just unbelievable.”

The board of The Friends of The Thread has expanded from seven to 10 members. The current board, with new members, includes Susan Bowie, Bob Goehring, Rick Brock, Curtis Brown, Kelly Cook, LeGree McCamey, Charlie Metcalf, Kendra DeVane, Rob Goldstein and Megan Hudson.

“The Thread is supposed to be enjoyable for the community,” Taylor said for board newcomers. “Enjoy your time on the board.”

Landa advised that the new board members should not let the small details bog them down.

“What do we want to see in 29 miles? Because you’ve got to keep working toward that vision and not get buried by what happens day-to-day,” Landa said.

All four of the members said that while they leave they board, they aren’t leaving The Thread or LaGrange any time soon.

“Even though I’m coming off the board, public health is still very involved. We’re doing research and outcomes research with LaGrange College and Columbus State,” Obasanjo, who works with the health department, said.

Freeman said even with the board of The Friends of The Thread, the organization needs volunteers who can help in any way.

“None of this would be here without the contributions of these people,” Goehring said.