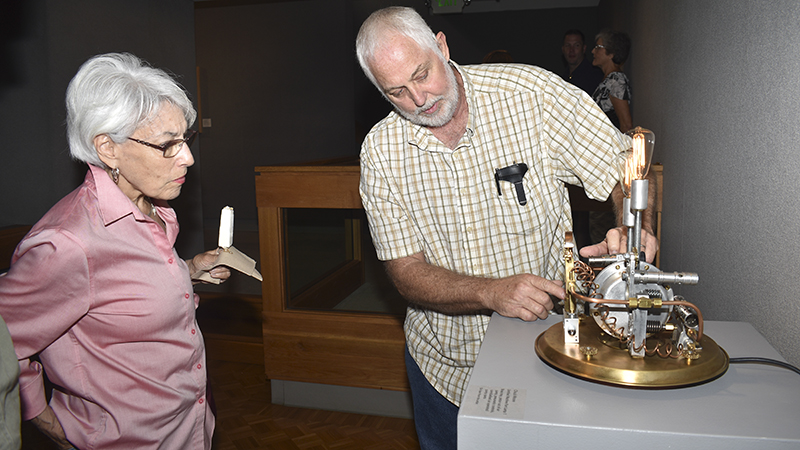 The LaGrange Art Museum recognized Valley artist Chuck Moore for his sculpture work Saturday with a “pop” in reception. Frios gave free popsicles to visitors who were able to meet with Moore.

Moore has nine metal and wood sculptures on permanent loan at the museum and 21 pieces displayed around the city of LaGrange.

“We just wanted to thank him for all of the generosity that he’s given us and because the show ‘take your time’ has been a summertime show,” Laura Jennings, LAM executive director, said. “We thought it would be casual, drop in, have a Frios pop and look at the art.”

Jennings said Moore’s work became integrated with the city when he contacted the museum in February about donating some sculptures.

“We went to his house in Valley, Alabama, and were amazed at how many pieces of art there were large sculpture, small sculpture, he works in wood, metal, electronics,” Jennings said. “We were really impressed with the diversity and he’s had no formal art education. Now we have his art on the thread, at Sweetland, in front of LSPA and have somethings here at the museum on permanent loan.”

Moore said his sculpture pieces come from old textile mills where he takes part and wood that can only be found there and makes them into art. His sculptures include the guitar player at Sweetland, the dog outside LaGrange City Hall and the bugs by the model mile of The Thread.

“It’s nice to have the stuff for it out to be seen because I have so much of it,” Moore said. “A lot of what I’m doing is to basically save these things. A lot of it comes out of textile mills that are no longer standing. I’ve been in textile mills since I was 17.”

Sandy Springs resident Linda Bain said she enjoys going to the LAM because of the unique artwork.

“This is a fun exhibit particularly for me because of where it comes from,” Bain said. “It’s coming from the mills from around and then he creates these fabulous pieces of art and it’s fun to see it and it’s such a privilege to meet local artists.”

Jennings said her favorite Moore Piece is the guitar player at Sweetland.

“People are just really excited to come upon the bugs at the thread, and his work is so different and diverse that you don’t say ‘oh that’s a Chuck Moore piece,’” Jennings said. “It’s all very, very unique.”

Jennings said when she took over as the LAM’s executive director in January, she wanted to bring more sculpture in the community.

“I wasn’t quite sure how we were going to find funding to find some good pieces of sculpture,” Jennings said. “It was just a blessing that this basically fell in our laps. I think sculpture is important because we are an art community.”

Moore said having his art displayed gave him validity as an artist.

“I appreciate the city giving me this opportunity,” Moore said. “It’s hard to get people to recognize that you are an artist.”