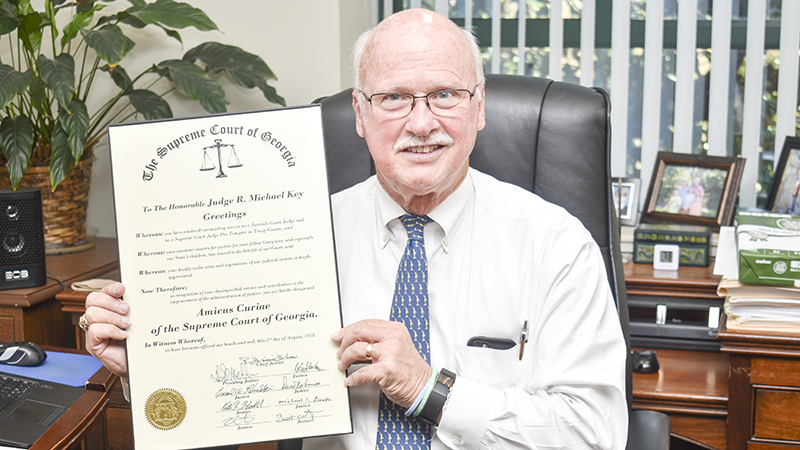 Troup County Juvenile Court Judge Michael Key was given the Amicus Curiae award last week by the Georgia Supreme Court. According to a Supreme Court of Georgia press release, the Amicus Curiae award, or friend of the court, is one of the highest awards given to “judges, attorneys and others who have provided exceptional service and leadership to Georgia’s judiciary.”

“I wanted to be a lawyer since I was a kid, but I never thought about being a judge,” Key said. “I wouldn’t sit on any other bench.”

Key said enjoys working in juvenile court since it’s focused on problem solving and because courts have an ongoing responsibility to children and families even after cases are decided.

“Dependency is an example. If we remove a child from a home and place a child in foster care or a relative, then we have to continue reviewing that case until the child’s achieved permanency, or returned home or somewhere else,” Key said.

“Locally, we just try to be innovative and watch for new procedures, processes, programs and try to give our families the best programs we can in the best process we can,” Key said.

Key said his staff has been innovative.

“We’ve been blessed with a lot of stability in juvenile court and have always received great support from the county,” Key said.

Key said he was blown away when he received a phone call from the Supreme Court that he was being given the award.

“My first thought was [the justice] had a project or something he wanted me to work on and then when he informed me on it, it was crazy,” Key said. “I never thought about receiving that kind of recognition from the supreme court.”

A native of Troup County, Key came back to LaGrange to practice law after receiving his degree from Emory University. Key said he has taught classes on law around the country and the state, and comes back with new policy ideas after visiting other courts.

“His care and attention for the children and families of this state raises the performance bar for all of us.”