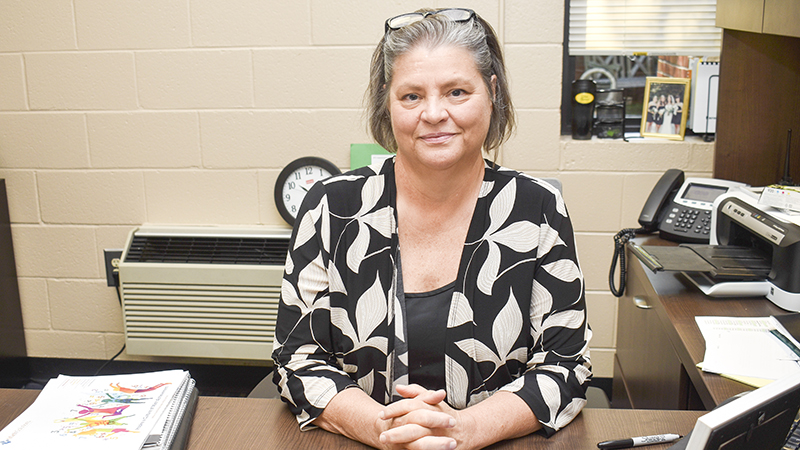 Gina Turner, the new principal at Hogansville Elementary School, poses for a photo at her desk Tuesday. --Gabrielle Jansen

Editor’s Note: This is the fifth part of a series of stories featuring new principals in Troup County.

Hogansville Elementary School principal Gina Turner is ready to start a new chapter for the school year. Turner, who served as interim principal at HES during the last nine weeks of the 2017-2018 school year, said she her favorite thing about education is teaching students how to read.

“It opens up a whole world that they don’t even realize how important it is, but that’s the part that keeps them motivated,” Turner said.

Turner said her focus this year includes reaching literacy goals for children for what kind of writers and readers they want to be.

“We have very lofty expectations for our kids, but I have every confidence in the world that they are going to reach those,” Turner said. “Kids have dreams about what they want to do and what they want to become, and literacy is one of those strongest indicators on whether or not they’re going to meet those goals. That’s the reason why I want to see that happen.”

Being a bibliophile herself, Turner said she even enjoys reading the children’s books her students read. Turner’s daughter, Julia, owns a bookstore and has sent her galleys, or unpublished books. Last year, Turner gave those books to her fourth-grade students to read and review.

“They sent those to the publisher of the books,” Turner said. “It was neat. I want to continue doing that work for our kids. Reading books that haven’t even been seen by the public yet is kind of nice.”

Turner has worked in education for 37 years.

Turner said she started in DeKalb County schools in the 1980s before working at Buford City Schools as a teacher.

In the early 1990s, Turner said she and her husband, John, decided to move to his hometown of LaGrange with their children.

Turner then worked at Hollis Hand Elementary before starting the first pre-k program in LaGrange, which later consolidated with Troup County.

Turner then moved onto Ethel Kight Elementary School before becoming a technology and literacy coach.

She then held the academic coach position for the school system until she became interim principal at HES.

“I’ve written a lot of curriculum, a lot of instruction and did a lot of professional development for teachers, a lot of model lessons around the district,” Turner said.

“I’m the teacher’s coach so to speak … When I first came out of the classroom after 22 years, it was very difficult. I missed the children. I missed the interactions with them and that wonderment they bring when they’re trying to learn new things.”

Turner said the school will also focus on telling students to “fill their buckets” by focusing on the positive things and keeping a good attitude.

Turner said she always appreciated HES because the teachers were always willing to try new practices and curriculum when she was an academic coach.

“When the opportunity came to come to Hogansville, I’ll be perfectly honest, I took a moment and paused because I am at the end of my career, but it was the teachers and the students who brought me here to do this,” Turner said.

“If it weren’t for the teachers and their willingness to do anything and try anything and give 110 percent not only for the kids in this building but for the community, I might have thought a bit longer about it.”

As a parent of four, Turner said she and her husband enjoy traveling and visiting their daughters, Jennifer, Joanna, Julia and Jesse, who live across the country.