Historical society puts on the Ritz 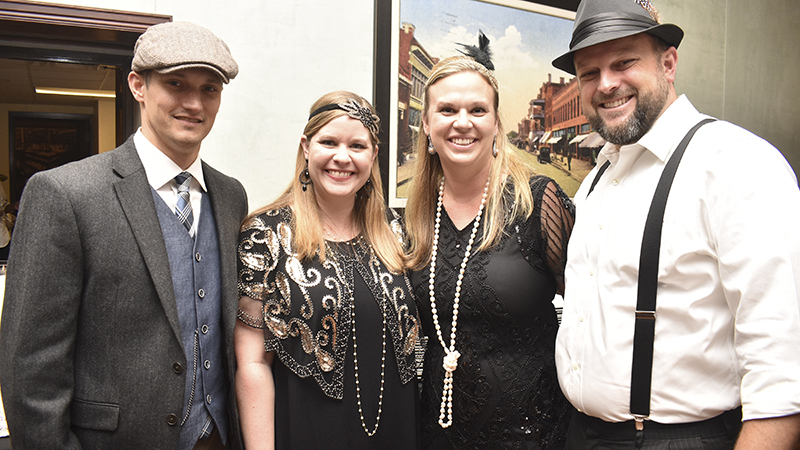 Ryan Chamblee, Amy Chamblee, Christy Dolinger and Brian Dolinger pose for a photo at Putting on the Ritz, a fundraiser for the Troup County Historical Society. --Gabrielle Jansen

Del’avant Event Center was the bee’s knees Friday night for the Troup County Historical Society’s Legacy Museum’s “Putting on the Ritz.” The 1920s themed gala and silent auction was held to benefit the archive’s annual budget.

People dressed up in fashions of the the 1920s, with multiple flappers in attendance.

“The decade between the Great War and the Great Depression has long been fascinating to me,” said Shannon Gavin Johnson, the executive director of the Troup County Archives. “I think it began in high school, when like so many of you, I was required to read F. Scott Fitzgerald’s ‘The Great Gatsby.’”

Johnson said they hoped to engage attendees physically, cognitively and emotionally and experience a bit of the 1920s.

LaGrange artist Annie Greene had yarn art pictures displaying scenes from the 1920s available for bids at the silent auction. Greene said she and her husband Oliver served on the historical society’s board for years.

“In order to do those [depictions], I had to do a lot of research, and then getting into yarn, I thought about putting in a cabinet with a lot of liquor in it since they’re in the club. Then I thought oh, they had prohibition during that time,” Greene said.

“I had to go pull all these bottles, the yarn that indicated the bottles of liquor, I had to pull all of that off and just make doors to the cabinet.”

The event also had a live band perform music from the Jazz Age and a stock market game.

“I think it’s very important because the historical society, we need to know about our history from whence we have come,” Greene said.

Brandon Hill said his favorite part of the 1920s was the fashion.

“They call it the Roaring 20s for a reason,” Hill said.

“I love history and also any opportunity to see how my grandparents lived their youth.  It’s pretty awesome.”