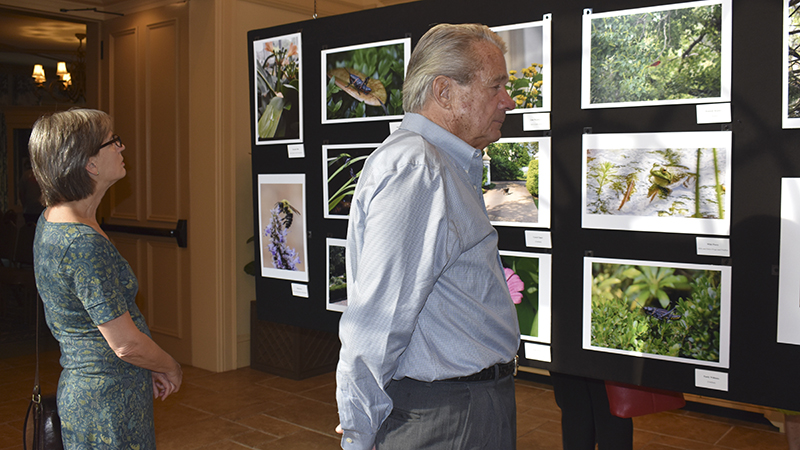 Guests check out the photos displayed at Hills & Dales on Tuesday evening. The photos were part of the estate’s photo contest held between March and July. --Gabrielle Jansen

The Hills & Dales Estate Photo Contest reception was picture perfect Tuesday night with multiple shots of the gardens and estate on display.

The contest for amateur photographers was held between March and July, and the winners were announced at the reception. Participants could submit up to three photos of the gardens and estate.

Hills & Dales Estate executive director Carleton Wood said they originally had five categories, but the judges expanded it to eight because it was too hard for them to pick winners.

“The judges could not believe the quality of the submissions and the numbers,” Wood said. “When the judges came over, we had actually planned to have five categories, and they were so impressed and were finding it so difficult, they decided to have eight categories.”

Wood said 77 photographers participated and 175 images were submitted. LaGrange College photography professor John Lawrence had his students participate, so they also had their own category. Student Hannah Peek won first place for the college’s category with a photo of a row of succulents.

First place winners were given $100 and honorable mentions were given annual passes to Hills & Dales. Best in show received $250.

“I want you to know if you’re a photographer and you are not on this list, that’s OK because I literally saw the judges arguing back and forth on two or three different photographs,” Wood said. “It’s almost impossible to decide which one is best, and it’s very subjective.”

Cassandra Souza’s photo looking out from a greenhouse into the herb garden won best in show.

Souza also won first place for the architecture category for the same photo. Architecture and the Callaway house were split into two categories. Carol Churi won the latter category.

Plants and flowers were split up into two categories, with the judges adding a plants and flowers close-up. Susan Perry won the former for a shot of the sun streaming through a tree in the church garden. Teresa Houze won first for the close-up category for a magnolia shot.