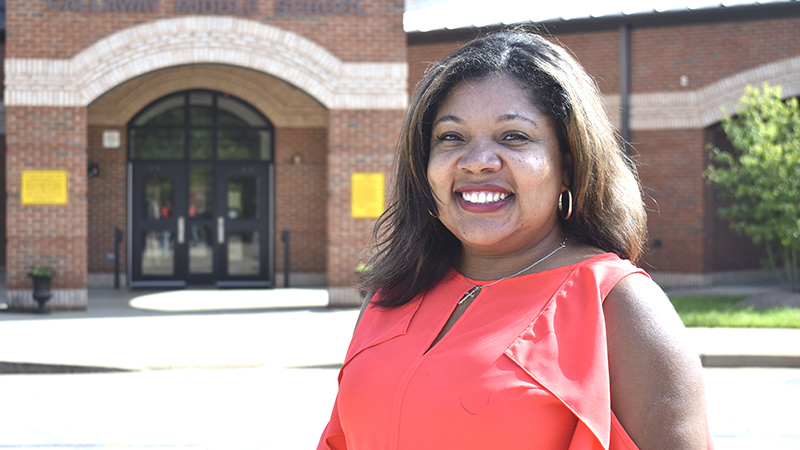 Editor’s Note: This is the eighth and final part of a series of stories featuring new principals in Troup County

After moving as principal from Callaway Elementary School to principal of Callaway Middle School, Amy Thornton has seen her students grow quite literally.

“It’s fun seeing them in the hall,” Thornton said. “Like I said, I was at Callaway Elementary for seven years, so for some of them I was their principal since first grade and now they’re in eighth grade. They look a lot different now, especially the boys from when I saw them as their principal at the elementary school.”

A Troup County native, Thornton graduated from Troup High School in 1992. Thornton has worked in the school system for 21 years, starting as an English teacher at Callaway High School, where she worked for seven years.

Thornton then worked at Long Cane Elementary as an instructional specialist and at Cannon Street Elementary School. Thornton was the CES principal for seven years before being moved to CMS this year.

“I’m looking forward to the connection between elementary and middle and middle and high being that bridge because I’ve worked at Callaway High School, and I’ve been the principal at Callaway Elementary School,” Thornton said. “So, I think being the principal of Callaway Middle is a unique place to be to really be able to see and follow through with that kindergarten to twelfth grade student.”

“That’s exciting to see them grow and develop and be great principals and do great things,” Thornton said.

Thornton said her main goals this year are for student growth and achievement along with building relationships with the staff, parents and students.

Thornton said it has been a great first week at CMS. She said she is looking forward to agreat year and support from the community.

“The teachers are excited,” Thornton said. “The kids are, I think they are excited, but middle school kids probably won’t let you see it that much. They’re adjusting to a new principal, and it’s been a really good first week.”

“The days are never the same. They’re fast-paced. You never get bored, and you’re around people all the time, so that’s what I love about it,” Thornton said. “I like to see students get it and not just academically, but when they start getting life.”

Thornton has two daughters, Katelyn, 21, and Leila, 12. Outside of work, Thornton is an avid University of Georgia football fan.

“My fall will be spent traveling and following my Bulldogs watching them play football,” Thornton said.