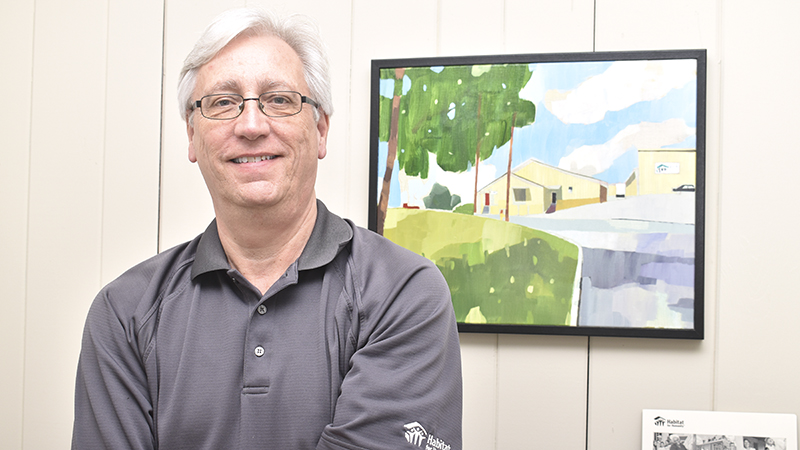 “Every night we talk about what the sermon’s going to be like, and we talk out back,” Brown said.

“Neither of us would be doing this without the other. It’s really the two of us. It’s pretty phenomenal.”

Brown said the movers will be at their house in about 10 days, and Clark will give her first sermon Sept 2.

Brown said he became interested in volunteering for Habitat for Humanity from attending church. He met his wife at Dallas-Dodd Presbyterian Church, where she currently works as a pastor.

“I really loved doing it. My first job as a volunteer was roofing a house. [I’m a] pretty slow, but accurate roofer,” Brown said. “I read a book called ‘What Color is Your Parachute,’ and I realized I wanted a life changing-job, so I went after a life changing job.”

After volunteering for a few years, Habitat was looking for a new director, and he was asked to apply for the job. Brown was offered the job, and he accepted it.

“We’ve done about 50 new houses and remodeled, rehabbed or recycled about 30 additional ones,” Brown said.

Brown said a challenge as executive director was competing with other similar nonprofits, such as DASH and the Fuller Center.

“We’re all trying to do the same thing, so one of those challenges is to be creative,” Brown said. “We can’t all get the same dollar from the same funders, so the Restore really helped us a lot. It funds everything.”

While he doesn’t have immediate plans for what he’ll do when he gets to Greensboro, Brown joked he may go to the local Habitat center to volunteer.

“I could show up and say ‘hey I made all these mistakes, don’t make them here,’” Brown joked. “I may sneak in and volunteer at the Restore.”

Brown said his favorite thing about LaGrange is watching it grow.

“We’re down here at the end of Main Street, and just seeing all of this coming toward us and seeing the progress has just been fabulous,” Brown said. “It’s going to bode well for us.”

Outside of work, Brown said he enjoys preparing church services with his wife, gardening and collecting music.