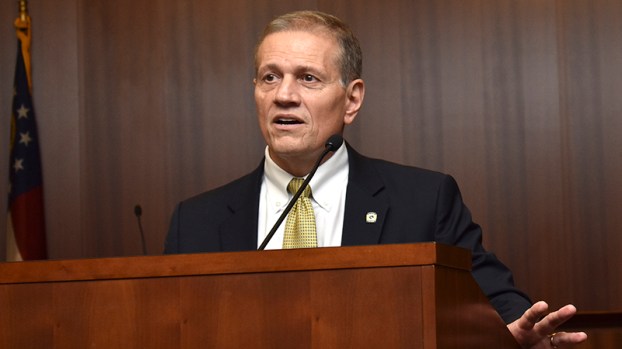 Four people graduated Friday afternoon from the Troup County Mental Health Court program, an alternative program for those who commit felonies and misdemeanors but suffer from mental health problems.

The Troup County Mental Health Court started in 2011 and aims to discourage repeat offenders. Those in the program with misdemeanors are in it for 12 months and those with felonies serve it for 18 months.

This is the third graduation held for the Troup County Mental Health Court.

“Some of those graduates are here today,” Rivers said. “Some of them have moved away to have a fresh start at life, and some of today’s graduates have entered into the workforce, become productive citizens and are working today even as we speak.”

LaGrange Police Chief Lou Dekmar was the guest speaker at the graduation. Judge A. Quillian Baldwin Jr. said Dekmar was the catalyst for starting the program.

Dekmar said 25 percent of those killed by police are affected by mental illness in the United States. He also mentioned how Crisis Intervention Team Training was started for officers to respond to people with mental illness.

“Because as a matter of default, the police have become the first responders of mental illness,” Dekmar said. “We felt that it was important that our officers be trained.”

Dekmar said of the 49 participants who graduated, only six have reoffended since.

“It’s not about who wins the case,” Dekmar said. “It’s about how is that case handled in the best interest of that person.”

Mental Health Court Coordinator Tiffany Hutchinson was honored for her distinguished service at the graduation.

“[Hutchinson] has been the real force that has driven this court along with staff that we have that meets every time that we have court to discuss the best cases and discuss what we need to do,” Baldwin said.

Amber Smith thanked the court for giving her a second chance.

Some children practiced cuneiform, while not far away, a 4-year-old used a simple machine to lift her father at the... read more