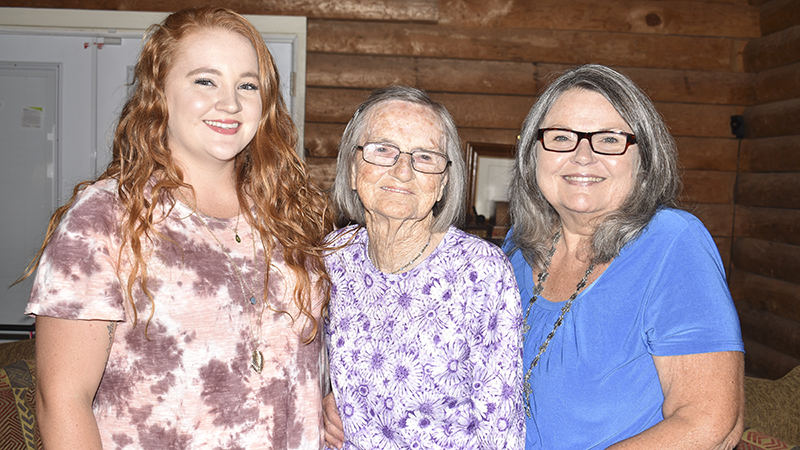 Hogansville resident Ada Maye Lynch still remembers the times she spent taking care of children at her old house on Railroad Street in LaGrange, and she loves to quilt and sew. She can also recollect watching her mother selling homemade jam during the Great Depression.

It’s the countless other memories and skills that dementia has taken away from her at age 93. Lynch was diagnosed in 2011 and moved in with her daughter, Vickie Holliday, in March 2017.

“I tried to keep all the grandbabies for a while, but they are keeping me now,” Lynch said.

Holliday said they can see a change in her during the last few years.

“A lot of the things I try to talk to her about are the past, things that I know the answers to to see how much she can still remember,” Holliday said. “She is starting to really now forget a lot of the long-term things.”

Holliday works at West Georgia Home Care and is on the board for the local Walk to End Alzheimer’s. When Lynch was diagnosed with dementia in 2011, Holliday got involved in the walk with her office in 2012 with the team Home Care Heroes. Four years ago, she started a family team for Lynch called Nanny’s Angels.

“We just noticed her telling us the same thing over and over and over, but now after seven years, we can see that it’s gotten worse,” Holliday said.

When she was first diagnosed, Lynch was living in her own apartment. Today, she stays in the front living room of Holliday’s house, where she has better mobility. Holliday has had hired help take care of her when she is at work.

“She’s kind of lost here. She wants to go home. She packs all the time,” Holliday said. “She knows she’s not at home, but I want her to be at home as much as she can here. This is our location where everybody can come in and visit with her in the living room.”

It takes a lot to take care for someone suffering from Alzheimer’s. Holliday said she and caretakers have to make sure Lynch eats healthy food, takes her medicine, bathes and washes her hair. Holliday has to make sure her mother doesn’t leave food in the bed for ants to find, and keeps a baby monitor on the stairs so her mother won’t put it in her pocketbook.

“[The caretakers] are here to do for her and, sometimes, doing for her is taking her out for a ride and getting a hamburger at McDonalds because that’s what she likes to do,” Holliday said.

Holliday said her mother had worked third shift in a cotton mill before retiring and deciding to watch her grandchildren and neighbors’ children.

“She was always the caregiver for anyone who was sick or any children who needed to be taken care of,” Holliday said. “She kept all of my children while I was working. She kept my sister’s daughter. She kept a lot of people’s children when she stopped working in the cotton mill. My dad was a bed patient for several years before he passed and she was his caregiver.”

Lynch even had a prayer phone chain with her friends. When she lived alone in an apartment, Lynch had room for people to stay and would stay up for others if they wanted to talk to her.

“If you ever needed to be prayed for, this woman was the one to call up,” Holliday said. “Now, we can hold hands, and she can pray, but it’s very short and quick,” Holliday said.

Lynch is the oldest parishioner of Pentecostal LaGrange on Youngs Mill Road, according to Holliday.  In addition to support groups she attends, Holliday said the Alzheimer’s Association’s helpline has provided assistance. The number is 1-(800)-272-3900.

“I work 40 hours a week, and I could not do it without sitters and without people helping me,” Holliday said.

This year’s Walk to End Alzheimer’s will be held Sept. 15 at Vernon Woods Retirement Community. Holliday said Lynch will also take part in the walk.

“Last year, we pushed her in the wheelchair, and we plan to do that this year,” Holliday said.

To learn more about this year’s Walk to End Alzheimer’s, visit Act.alz.org.