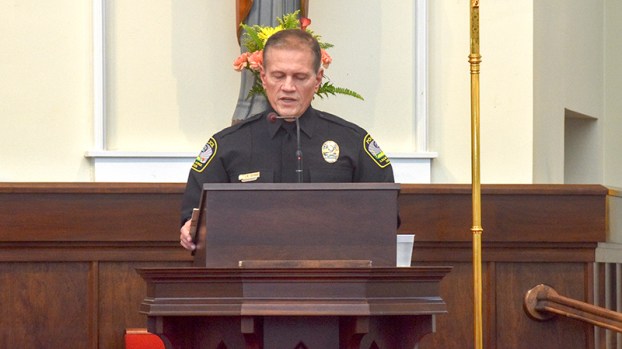 The front three rows of the church were filled with first responders from the LaGrange Police and Fire Departments, Troup County Sheriff’s Office and American Medical Response.

The Blue Mass is an annual mass held throughout the United States.

Father Tim Gadziala, the church’s priest, said he chose the reading of Jesus being asleep in a boat during a storm because, like Jesus, first responders also must remain calm in emergency situations.

“Sometimes when bad things happen to people we wonder ‘where is Jesus, where is God in all of this?’ That’s true, we do that a lot. We question God, we question his existence. And all the while he’s very present in our lives. Every part of your life — the stormy times, as well as the nice times,” Gadziala said. “[God’s] present everywhere, not just exclusively the Catholic Church. In every faith, in every denomination, he’s in the human heart, especially through baptism.”

During the Mass, Gadziala gave St. Michael the Archangel, the Catholic patron saint of police, prayers cards to all of the first responders.

Dinner for the first responders was served after the Mass.

Veterans Fishing Organization serves those who have served the country

For many veterans, fishing is a way to relax, but just finding someone who can help them in and out... read more