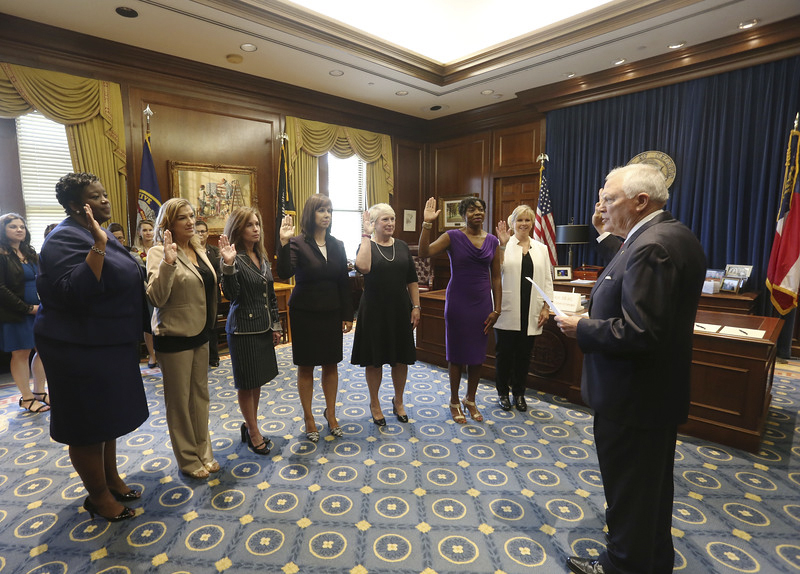 Harmony House Domestic Violence Shelter director Michele Bedingfield was sworn in by Gov. Nathan Deal on Aug. 15 to serve on the Georgia Commission on Family Violence. Bedingfield and 38 others from state legislation, law enforcement and those working in the field against domestic violence are getting together to create and support task forces to end violence in their communities.

Bedingfield said she was contacted by Jennifer Thomas, the executive director of the commission, months ago and was asked if she would accept the nomination for the commission.

“It is an honor to be appointed by Gov. Deal to this position,” Bedingfield said. “I look forward to working with other professionals across the state as we work hand in hand to end domestic violence.”

The GCFV was created in 1992 by the Georgia General Assembly to plan to end family violence in the state. Bedingfield will serve on the legislative and 2019 conference comities for the commission.

“The commission is made up of a variety of people who work in domestic violence from across the state,” Bedingfield said. “It’s not just my [voice] that’s going to be heard, it’s the [voices] of other professionals.”

On the commission, Bedingfield is one of three advocates for battered women. Bedingfield said Troup County State Court Judge Jeanette Little has also previously served on the GCFV twice.

“It’s an honor to be in this position, and I look forward to representing not just Troup County, but all victims of domestic violence,” Bedingfield said.

While she will meet quarterly with the commission, Bedingfield said her new position will not interfere with her position at Harmony House.

“I’m not going anywhere,” Bedingfield said. “I love what I do. I love the team that I work with. I couldn’t ask for a better community to work in. Most of the meetings are held via phone conference because this is a state commission. There are people from all over the state who are going to be on it, so they’re sensitive to that.”